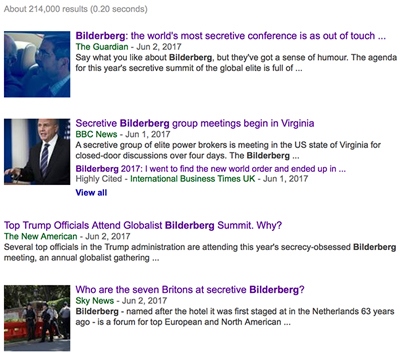 News coverage of the Bilderberg Group hit record highs as the establishment media is forced to admit the true nature of the globalist gathering.

Remember it was only a few years ago that the mainstream media denied Bilderberg even existed.

But now, numerous news outlets including the BBC, Sky News, the Guardian and others are openly discussing the meeting in Chantilly, Virginia, where over 130 of the world’s top tech elites, bankers, politicians, royalty, media owners and intelligence agents meet in secret for four days without an official record taken of the proceedings.

“The 2017 edition of Bilderberg, long a byword for secret societies and globally conspiratorial behaviour, wraps up its four-day sojourn in the western Fairfax County spot of Chantilly today and we are, as per usual, none the wiser about what went down in those hallowed conference rooms,” reported NewsTalk.com. “…First held in the titular Netherlands hotel in 1954, ostensibly to foster better relations between Europe and North America, Bilderberg has been an annual, travelling summer affair in the six decades since.”

“The fact that it brings together (on invitation only) some of the most powerful political and financial leaders on the planet for a spot of behind-closed-doors hobnobbing and potential global policy discussion has been raising concerns since it properly entered the public consciousness around the turn of the century.”

In the US, there’s still a mainstream media blackout of Bilderberg coverage, which is expected considering how many American media owners are connected to the group, but the US media cannot control the flow of international news reports on the Internet.

And Bilderberg awareness is exploding, especially after its members openly spoke out against President Trump.

As reported over the past few months, several globalist publications connected to Bilderberg have pushed the overthrow of Trump using the “continuity of government” mechanisms in place since the Cold War.

Their arrogance, however, is their downfall.

Trump is a manifestation of the will of the people to take back control over their own destiny away from Bilderberg elites who think the public must be led like sheep to the technocratic future they envision.

So there’s no coincidence that the rise of President Trump corresponded to the rise in public awareness of Bilderberg.

Deception will never hold up when the people rise up in mass to unmask the truth.

“If Bilderberg wants an answer to ‘Why is populism growing?’ – another question on its agenda – they might take a look in the mirror,” the Guardian’s Charlie Skelton pointed out. “It’s almost as if people aren’t all that comfortable with unaccountable technocratic elites and billionaire globalists lobbying their ministers and party leaders behind closed doors.”