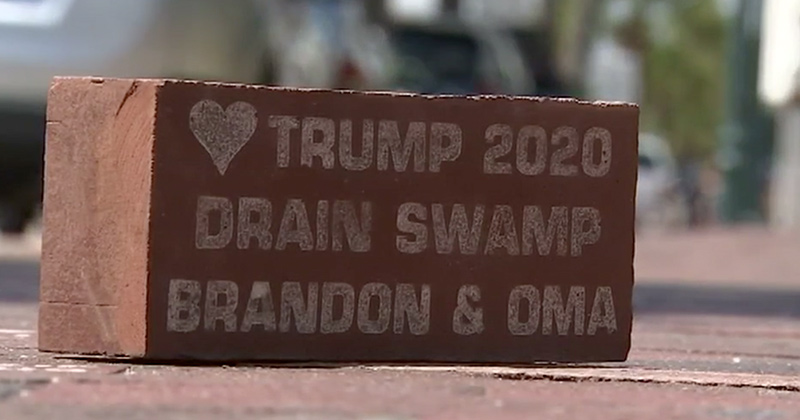 A personalized brick paid for by 80-year-old Florida resident Afien Casey was removed from a public sidewalk after leftists complained about it on social media.

“Trump 2020, Drain Swamp, Brandon & OMA,” read the $95 brick that was placed on Flagler Avenue in New Smyrna Beach over a year ago.

The brick was removed sometime last week before Hurricane Dorian hit, but Casey’s daughter Donna Lee says she was able to get the brick back after it was taken out.

She’s upset about the message being censored, and she said no one told her that the brick would be removed.

Personalized bricks are scattered along the sidewalk and this program has been around for 30 years.

The business owners said they have never known a brick to cause this much controversy and it all started with chatter on social media.

Casey said she doesn’t want her money back, she wants her brick to be placed in its original spot.

“I bought the brick a year ago,” Casey said. “Of course, I’m older and I’m not going to be here forever, so when he is really growing up and gets in his 20’s he can always go back to Flagler Avenue and say this is what OMA and I did.”

Casey, who came to America as an immigrant, sees the censorship of her bought and paid for brick as a violation of free speech and an indication of where the country is headed.

“I came here because this was a country, of the free and the brave,” she said. “It doesn’t seem like we are free anymore and if we don’t speak up against this bullying, so to speak, we’re not brave anymore either.”

ABC 9 Orlando covered the story in the following report:

Over 60 women accused him and he’s been sentenced to jail, yet Bill Cosby’s Hollywood Star is not being vandalized or protested as Trump’s was.

Do the liberals “believe women” or care about “survivors”?

Do they want to protect children from sexual predators or is their transgender agenda more important?