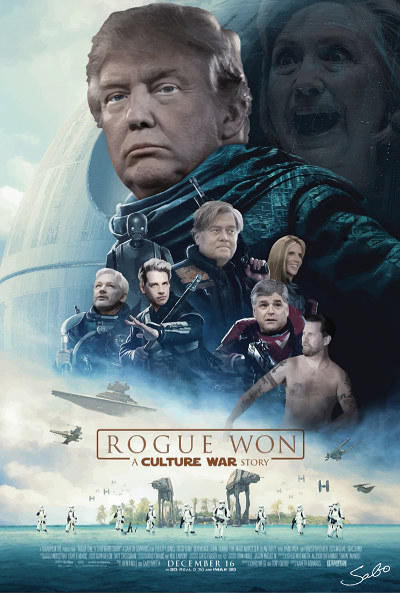 “Rogue Won” faux movie advertisements were strategically erected under cover of darkness just prior to this weekend’s Rogue One world premiere at the Pantages Theater in Los Angeles, California.

Conservative street artist Sabo claimed responsibility for the attacks, which were aimed directly at cultural marxists and divisive leftist drones whose hijacking of Hollywood has finally met with resistance from Americans sick of political correctness.

His “Rogue Won” parodies feature Trump and likenesses of prominent supporters – Milo Yiannopoulos, Ann Coulter, Sean Hannity, Steve Bannon, as well as Julian Assange, who played a critical role in exposing the corruption of Hillary Clinton and the Democratic Party.

The #DumpStarWars campaign has picked up serious steam, being retweeted 120,000 times in a 24 hour span, since at least two of the writers on the film emerged as avid social justice warriors and anti-Trumpers. Both Chris Weitz and Gary Whitta have taken to the kind of moral preening that almost only seems appropriate and logical to the delusional inhabitants of suffocatingly tiny intellectual bubbles.

Shortly after Donald Trump won the presidential election, Weitz drew a correlation between the ‘Empire’ from Star Wars, and Trump and his supporters, declaring, “Please note that the Empire is a white supremacist (human) organization.” Whitta added on, “Opposed by a multicultural group led by brave women.” Both Tweets have since been deleted.

They both reportedly changed their avatars to Star Wars-themed adaptations of the trendy “diaper pin” used by liberals to virtue signal their nobility to others.

If Star Wars — an obvious allegory about Nazism — feels like an attack on your candidate, the problem isn’t with Star Wars… #DumpStarWars

Jack Posobiec, investigative journalist and CitizensForTrump special projects director, has been at the heart of the Rogue One boycott – which is now being championed by the likes of YouTube titan Stefan Molyneux and Barack Obama’s brother, Malik – since he birthed the #DumpStarWars hashtag on Periscope, partially in response to a #TrumpIsVader hashtag.

“Hard-working Americans are getting sick of the left invading every institution, school, and movie with their Cultural Marxism,” Posobiec said. “Everyone knows Star Wars is a story of the ordinary people fighting for freedom against the evil galactic Establishment.”

Sabo brought the fight to Hollywood’s doorstep on Saturday, waging his infamous brand of guerrilla art warfare in anticipation of the ‘star-studded’ event.

“To think: Hillary had just about every facet of the media pulling for her. I’d never seen the mainstream media sell their souls for a candidate the way they did for Hillary, and she still lost,” Sabo said. “It does my heart well to know Hollywood went all out producing all kinds of girl-power movies in anticipation of the first woman president only to have their parade totally rained on by a white-skinned, blue-eyed, all-America loving, pussy-grabbing blowhard of a man’s man.”

“The left is constantly trying to tell our children those on the right are apart of the ‘Evil Empire’ when in fact it’s the left who’ve constructed a ‘Death Star’ in the form of Hollywood. It shoots its laser of disinformation through the world, with an aim to indoctrinate everyone it touches,” he added.

While the Hollywood elite feel no compunction over openly demonizing large swathes of the American populace and their choice for president, they don’t dare speak poorly of say, totalitarian communist regimes, such as China, who hold immense power over the major studios and their output.

The Hollywood Reporter notes, “Of course, for those who say Hollywood should never self-censor in the face of authoritarianism, there’s ample evidence it has been doing so with regularity for China, recutting movies like the Total Recall remake or reconceiving a Red Dawn redo to gain access to the lucrative market. If Weitz had tweeted a similar sentiment like: ‘The Empire is an authoritarian state led by Xi Jinping,’ he would have been committing box-office suicide.”

Los Angeles County, which is comprised primarily of the sanctuary city of Los Angeles, was won by Hillary Clinton by a margin of 71% to 23% over Donald Trump.