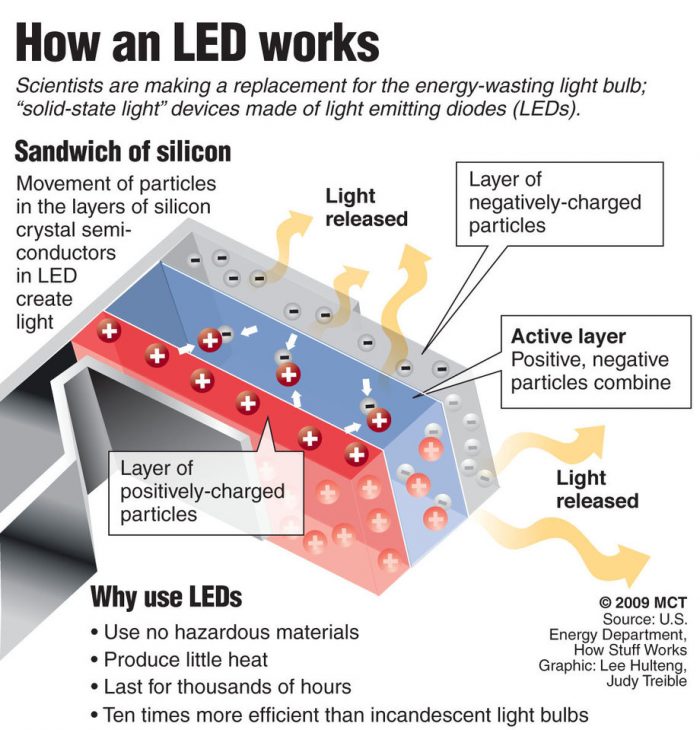 A professor of psychiatry at the University of Essex in the U.K. claims LED light bulbs, which have become commonplace since the federal government began to steer buyers away from incandescent bulbs in 2007, are causing headaches, pain, and dizziness. [1]

Arnold Wilkins says LED lights dim by 100%, which means they turn on and off hundreds of times a second. Most people don’t notice the constant flickering, but in some people, it can cause nasty symptoms within just 20 minutes of turning them on.  [1] [2]

“We know from earlier work on fluorescent lighting that even though the flicker is too fast to be visible, it remains a likely health hazard. In 1989, my colleagues and I compared fluorescent lighting that flickered 100 times a second with lights that appeared the same but didn’t flicker. We found that office workers were half as likely on average to experience headaches under the non-flickering lights.

No similar study has yet been performed for LED lights. But because LED flickering is even more pronounced, with the light dimming by 100% rather than the roughly 35% of fluorescent lamps, there’s a chance that LEDs could be even more likely to cause headaches. At best, it’s likely to put some people off using LED bulbs because of the annoying, distracting effect of the flickering, which we know can be detected during saccades.” [1]

The flickering can cause headaches, pain, and dizziness by disrupting movement control of the eyes, which forces the brain to work harder. Previous research suggested that flickering LED bulbs may double a person’s chances of developing a headache. [2]

Wilkins says that many people have started avoiding purchasing the lights because of the side effects.

“People do not like the flicker, it can make them feel dizzy and unwell after about 20 minutes, and can produce disturbing anomalies of perception, such as seeing multiple images of the lamp, every time you move your eyes rapidly.”

In 2007, under the Obama administration, Congress passed the Energy Independence and Security Act, a sweeping reform bill that the federal government used to phase out most incandescent light bulbs. The bill was signed into law by President George W. Bush. [1]

General Electric estimates at least 50% of all residential lights will be LEDs by 2020.

If the LED lights in your house are making you feel sick, you can purchase a more expensive lamp with a direct current versus an alternating current so that the light remains constant. However, the lamp’s components may not last very long. [2]