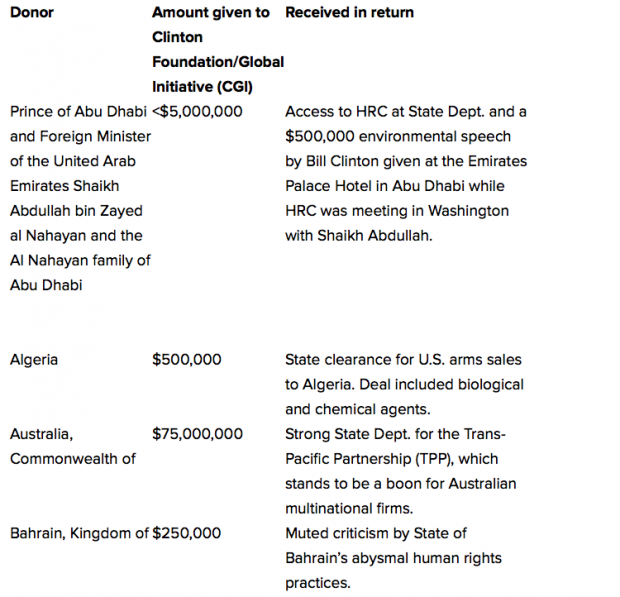 Hillary Clinton has a rich history of being influenced by outside forces, yet the media is currently focused on claiming Russia helped Trump get elected despite having no substantial evidence.

Private emails found on Hillary Clinton’s private email servers during her tenure as Secretary of State provide a clearer picture of the “pay-to-play” connections between Clinton’s State Department, the Clinton Foundation, the Clinton Global Initiative and the private investment consulting and investment firm of Teneo Holdings, Inc. in Manhattan.

For a full list of the foreign governments Clinton has answered to, you can download an extensive spreadsheet because the list is almost too large to publish in a web-friendly format.

Here’s a quick breakdown of the top two players:

– The Communist Chinese have put massive amounts of money into the pockets of Clinton via U.S. subsidiaries.

Some of the other donors include countries that may surprise you:

From selling millions of dollars of weapons to corrupt governments such as the Saudis, Qataris and Kuwaitis, to “influence-buying” within the Clinton State Dept., there is no shortage of evidence exposing Clinton’s level of compromise.

Alex Jones breaks down the amount of influence foreign countries have on Hillary Clinton:


Alex Jones sends an emergency message to Donald Trump that he must fight back against accusations of Russian involvement in our elections: