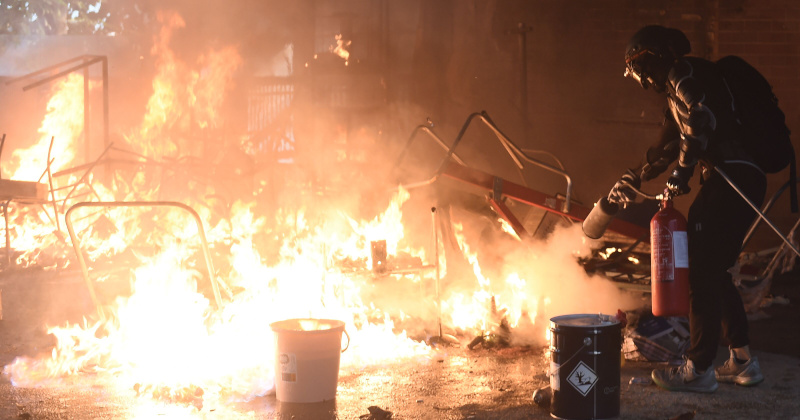 In one of the most gruesome videos to emerge from Hong Kong’s increasingly violent protests, an unidentified man was set on fire during an argument on the street in Hong Kong.

The older man, seen in the video wearing a green shirt, reportedly helped chase demonstrators from a train station as they worked to disrupt the Monday morning commute. As the crowd started to disperse, the man was filmed arguing with young people who appear to be supporters of the protesters.

Online video shows #HK rioters set fire on a man who disagreed with them. @hkpoliceforce has confirmed with the Global Times that the incident took place in Ma On Shan on Monday as black-clad rioters went on yet another rampage destroying the city. #香港 pic.twitter.com/NZigAZjm40

According to the South China Morning Post, the video shows the man, who is bleeding, walking away from the group and shouting “You are not Chinese.” A member of the group responds: “We are Hong Kongers” as the man walks away. Then, a shouted insult prompts him to return and confront the younger demonstrators.

As the man starts arguing once again with the crowd, a person dressed in black and wearing a face mask runs up from behind him and douses the man in a clear liquid. He then lights the man on fire with a lighter, instantly engulfing him in flames.

The incident occurred shortly before 1 pm on a footbridge, SCMP said. The man was recovering in a city hospital, and was in critical condition. Chinese media denounced his attackers as rioters, a term used often on the mainland to criticize and attack protesters.

Afterward, Hong Kong chief executive Carrie Lam said during a press conference on Monday that these “riotous acts have surpassed the five demands & are the enemy of the people.”

Monday marked one of the most violent episodes to take place during the week, disrupting the morning commute as HK’s MTR public transit shut down several stations.

Elsewhere on Monday, a protester was shot by police with a live round.