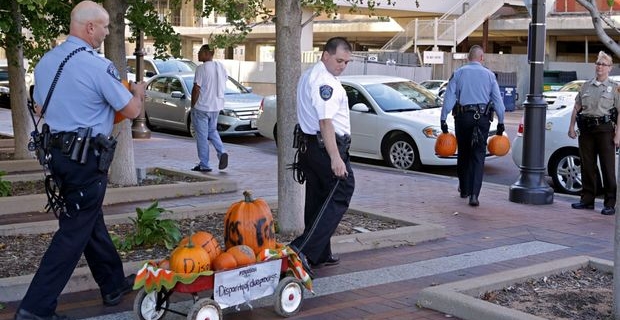 Protesters in Clayton, Missouri, who planned to smash pumpkins with “police brutality” written on them were arrested before they had a chance to do so Monday, with one person even being charged with assault.

As crowds gathered outside the St. Louis County Justice Center to watch the protesters symbolically smash police brutality, the cops arrived and confiscated a number of pumpkins.

The demonstration was intended to doff a cap to Ferguson protesters, as well as college students arrested Friday at a New Hampshire Pumpkin Festival where riot police were called in to break up partying using tear gas and pepper spray.

According to the St. Louis Post Dispatch, the cops arrested three people, two on charges of littering, despite the fact that littering is not an criminal offense, and another person was arrested on an assault charge.

Clayton Police Chief Kevin Murphy told reporters that the protester was charged with assault because police sensed the pumpkin was about to be lobbed in the “direction of officers arresting another person.”

In a video of the incident, onlookers are heard shouting “That’s theft! Why are you taking her pumpkin for? Why is y’all taking her to jail for?”

The pumpkin smashers also had gourds daubed with the words “racism” and “hate” which they intended to smash before the police prevented it.

It certainly appears that the vegetable police in St Louis like to squash First Amendment rights. The problems with policing in Missouri are clearly deeply rooted.