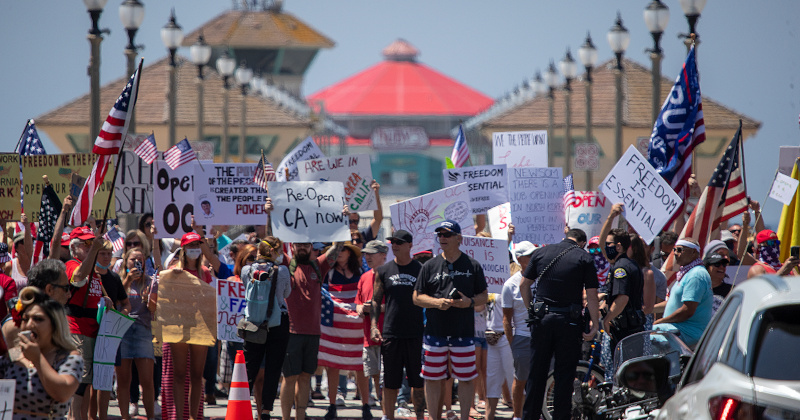 Even in California, a heavily socialist, overbearing tyrannical nanny-state, are people standing up for their rights.

Human beings were never meant to be caged by a few elitists and people have finally gotten sick of their enslavement to the political overlords.

Protests raged all over the United States over the weekend as millions of people begged the very government that enslaved them to free them.

Obviously, that’s not how it works, but the fact they are realizing no other human has a higher claim over them is at least, a step in the right direction.

People have finally grown tired of obeying the commands of the ruling class, and they have taken to disobeying orders to imprison themselves in their homes so they won’t spread a virus that even by government’s exaggerated numbers is still no worse than the flu.

The primary threat to freedom and justice is not greed, or hatred, or any of the other emotions or human flaws usually blamed for such things.

Instead, it is one ubiquitous superstition that infects the minds of people of all races, religions, and nationalities, which deceives decent, well-intentioned people into supporting and advocating violence and oppression.

Even without making human beings one bit more wise or virtuous, removing that one superstition (the belief in authority, that some have the right to command, and others have to obey) would remove the vast majority of injustice and suffering from the world.

The solution to these lockdowns has been with us the whole time.

We outnumber the police state and politicians by “orders of magnitude.”

If we decide to live our lives as the free human beings we were meant to be, there’s nothing the ruling class can do to stop us short of trying to make an example of a handful of people.

But once we stick together and disallow them to make examples of those people, we will be free.

There is no need for violence or begging.

Being free is our birthright and we should disobey any command that imprisons us and harms ourselves or others. We all need to realize it’s time to do the right thing, not the “legal” thing.

If you’re afraid of getting sick, stay in your home.

If you don’t want to open your business, don’t. But it’s the height of privilege to look down on those who are simply living their lives free of the chains the ruling class is desperately trying to force them into.

People all over are finally realizing that they were not born to be slaves to the elite few and the “order followers” such as police and the military need to take a hard look at themselves and what they are enforcing.

Cops and military: your children will have to live the world you are enforcing. If you want them to bow to a totalitarian police state, by all means, keep “enforcing” the will of tyrants on free people. But if you crave liberty, and want your children to have a life free from slavery, it’s time to stand up and say so.

This has become black and white. You are either free, or you are not. You either enforce tyranny or you do not. It’s not a gray area.

To those few cops who have stood up and refused to violate the rights of people, it’s appreciated. Now stand with those who want freedom, or align yourself with enslavement and tyranny. There’s no middle ground.

This all ends when WE say it does. I’ve said this from the beginning. They cannot enslave us once we all realize it’s our birthright to be free and we go about our lives in defiance of their orders, and peacefully coexist with each other. We are more powerful than they will ever allow us to know, and all we have to do is realize it.

This is just the beginning of humanity getting off its knees. It started when the government attempted to force falsified data about a virus down our throats, and it ends when we say it does. Take their power away by being uncontrollable. Take your mind back from the mainstream media, and never again allow yourself to be enslaved.

If you want to hear an uplifting message about why it’s important to speak truth to power and take your power back and just live as the free human you are, watch the video below. It’s long, but just the first few minutes are positive and will help you realize you are more powerful than any politician, tyrannical police state enforcer, or elitist. You just have to realize it.

This is the truth the “cabal” doesn’t want you to know:

“The universe is not working in humanity’s favor right now, because humanity has externalized its power to other entities. And everything that happening…everything that’s happening right now on the planet is…because of humanity’s ignorance.” – Ralph Smart

It’s time to wake up and be free as we were all meant to be. You don’t need the government, the elitists, or the cops permission to be free. That’s what the ruling class doesn’t want you to know.