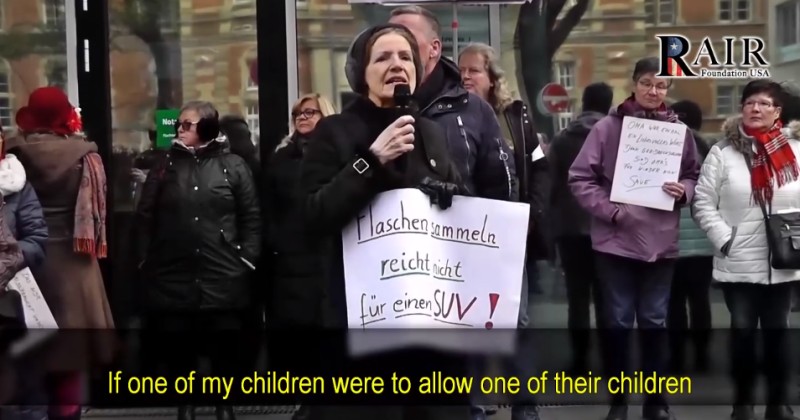 German state broadcaster WDR2 faced protests after it broadcast a video in which a group of children were taught to sing about how their grandmas were “environmental pigs” for driving non-electric vehicles and eating meat.

The controversy began after WDR2 aired the clip in which the kids sing, “My grandma drives in the chicken coop with her motorcycle…that’s thousands of gallons of gas every month, my grandma is an old environmental pig!”

In another part of the song the children sing, “Every day my grandma fries herself a pork chop…she does it because discount meat costs nearly nothing, my grandma is an old environmental pig!”

An almost immediate backlash prompted WDR2 to delete the online version of the clip before angry grandmas descended on WDR’s offices in Cologne to protest against the broadcaster.

“We are grandmas. Not #Nazi Pigs!” read one of the signs at the rally while another said, “My grandma is an old environmental pig. WDR exploits children to slander the elderly. Shameful! Stop causing division.”

If one of my children were to allow one of their children to sing something like this, which would never be the case, the shit would really hit the fan,” said one of the protesters. Without us grandmas, this country would have crapped out a long time ago.”

Commentators warned that the backlash was being exploited by “right-wing extremists,” prompting an Antifa presence at the grandma protest and the sight of left-wing radicals literally getting angry at grandmas for expressing their free speech.

The whole controversy was later dubbed ‘Grandmagate’ and although it is legitimately creepy that kids are being indoctrinated via climate change hysteria to hate their own family members, some think there’s bigger fish to fry in Germany.

“Well. The invasion of hundreds of thousands of third-world migrants is not enough to get ordinary German citizens to take to the streets. Not even if those culture-enrichers engage in rape, assault, robbery, arson, and other forms of general mayhem. But insulting their grandmas — that’s going too far!” commented the Gates of Vienna blog.