Plenty others, besides racers and spectators, could benefit from psychological treatment

Psychologists will be on hand at various points throughout this year’s Boston Marathon to address mental issues incurred from last year’s race. 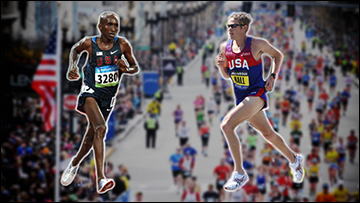 The unprecedented effort is being taken in attempts to accommodate spectators or racers who “may be feeling a little more on edge. A little more tearful perhaps or a little more irritable and less patient,” a psychologist tells CBS Boston.

Dr. Chris Carter, a Director of Behavior Medicine at the Spaulding Rehabilitation Network, says this year people will be “more reactive” as they relive trauma inflicted during last year’s race, where the FBI says two suspects planted bombs which killed three people and injured dozens.

Dr. Carter, however, neglects to recognize that more than just racers and race attendees have experienced undue emotional distress in the fallout from the bombings.

Psychologists might, for instance, consider tending to residents of Watertown, Mass., who after the bombings surrendered their rights at gun point and allowed jackbooted thugs to shred the Third and Fourth Amendments and invade their homes and privacy. Their actions undoubtedly inflicted undue trauma when they – like an army occupying foreign territory – evacuated American families from the safety of their homes.

The family of Ibragim Todashev, a mere acquaintance of one of the suspected bombers, may also be “a little more tearful” during this year’s race. Todashev was executed by the FBI during an interrogation in his Florida apartment. For close to a year, Todashev’s father has been waiting for answers as to why agents shot his son seven times, once in the head.

And for that matter, psychologists may want to reach out to the family of suspects Tamerlan and Dzhokar Tsarnaev, who were long ago tried and hanged in the media, absent of due process. Nevermind that FBI video showing the brothers placing the bombs has failed to materialize, or that events from the aftermath of the bombings raise more questions than answers.

Indeed, installing race-side psychological rehabilitation merely serves to add an element of drama to the situation, and moreover justifies the paranoid, over-the-top police state reactions that will now be routinely implemented at events countrywide.

Last year’s annual Detroit Free Press/Talmer Bank Marathon, for example, brought out the FBI, Department of Homeland Security, and Customs and Border Protection agents – the sight of which, coincidentally, may have inflicted distress on race attendees distrustful of federalized government.

The popular NFL Super Bowl has also jumped the shark in ensuring game patrons surrender their civil rights and submit to authority. This past year, the NYPD deployed gun boats, as well as armed officers with “heavy weapons” in the week prior to the Super Bowl. TSA VIPR teams were also on hand to greet visitors who arrived via public transportation.

In the run-up to the marathon, Boston Police are already on edge. Just last week they sent a bomb squad unit to detonate an abandoned pressure cooker they felt looked a bit too nefarious.

And the overt paranoia doesn’t stop there.

Members of the Massachusetts National Guard were also recently told they would not be allowed to wear backpacks during this year’s Boston Marathon, something members have been doing for the past decade, again illustrating how supposed terror attacks are used as pretexts to curtail freedoms.

Make no mistake, the unprecedented move to have shrinks nurture the public’s psyche serves to over-dramatize the events of last year and raise awareness for fundraising efforts from which most of the victims will never see a dime.