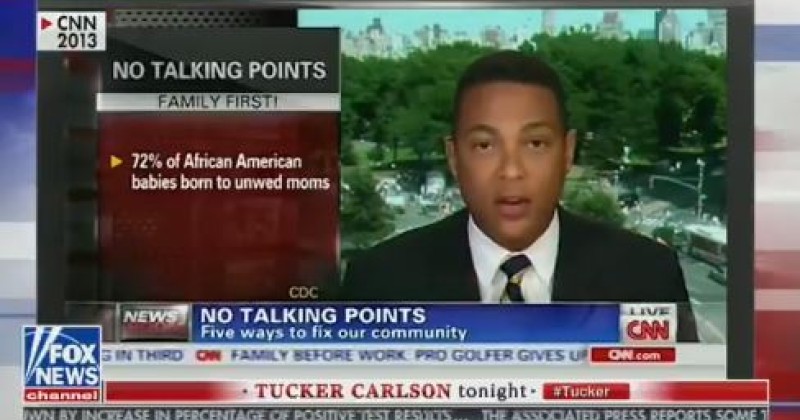 A vintage clip of CNN anchor Don Lemon telling black people to act civilized and disregard “street culture” has the woke pundit’s detractors’ jaws on the floor, wondering what happened to him over the intervening seven years.

In the 2013 clip, Lemon praises Fox News host Bill O’Reilly as the Republican pundit decries the “disintegration of the African-American family,” even arguing O’Reilly “doesn’t go far enough” when he denounces “street culture.” The video was posted to social media by “Panda Tribune” on Wednesday and quickly circulated among conservatives, who had a hard time reconciling this Lemon with his painfully-PC modern-day counterpart.

It is only edited for time (to fit Twitter’s 2:20 limit), but the context is unchanged.

The full video is in the link below.

I must admit: Don Lemon genuinely seemed to care about black lives in 2013https://t.co/XSf3nQua7o pic.twitter.com/kBFa6SPpH1

Ordering black people to “pull up [their] pants,” stop using “the n-word” and littering, “finish school,” and wait until they’re married to reproduce, the CNN personality of seven years ago comes off as borderline unrecognizable to those who know him as the ultra-woke face of the “Orange Man Bad” network.

Fox News host Tucker Carlson aired the segment on his show Wednesday night, marveling that if Lemon or one of his colleagues came out with those lines in 2020, “that would be their last live broadcast ever – they’d be fired immediately.”

This is an absolutely staggering take down of Don Lemon by @TuckerCarlson. pic.twitter.com/Gm7P5li6P6

Glenn Beck’s The Blaze concurred, asking “what are the chances 2020 Don Lemon would cancel 2013 Don Lemon?”

Many on the right wondered what had happened to 2013’s Lemon, whom one user called “an uplifting news voice for positive change” turned “fear mongering race baiting outrage culture grifter”…

He's seems intelligent, reasonable, and well-balanced here. What happened to him?

Who took Don's body over to do that? He actually made sense back then.

…or even the Lemon of 2014, who’d said he was “tired” of talking about race – but just this week debuted a podcast called “Silence is Not an Option” in which he talks about nothing else.

Don Lemon was tired of talking about race years ago. What happened to him? pic.twitter.com/ZoR2CpFCV5

This is who #DonLemon used to be (and probably still really is). When he said these things he was called “Coon” and “Uncle Tom” (sound familiar?)

He now hates Trump and pushes black victimhood narratives for a @CNN check.

I can't think of stronger evidence for the debilitating effects of TDS than 2013 Don Lemon vs 2020 Don Lemon.

Oh, Obama was in office not Trump!

Others expected his cancellation to arrive at any moment.