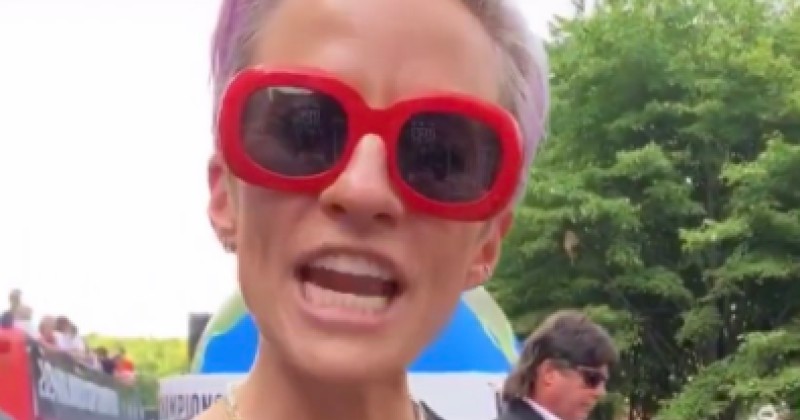 Purple haired anti-Trump U.S. women’s soccer star Megan Rapinoe appears to be getting more insufferable by the day after she was caught on video ranting “I deserve this” while holding the World Cup trophy.

“I deserve this!” Rapinoe screeched as she balanced the trophy on her knee, quite the contradiction from the usual behavior of champions who at least try to appear humble in victory while thanking their team mates.

Megan Rapinoe standing on a parade float in Manhattan with a bottle of Veuve in one hand and the World Cup trophy in the other shouting “I DESERVE THIS.”

There will never be a bigger mood. pic.twitter.com/GjHMjGkgsS

Recall this is the same woman who previously said she would never sing the national anthem again in solidarity with Colin Kaepernick. Rapinoe was also involved in an incident at the end of the final game where the American flag was dropped on the ground.

She has repeatedly refused to attend the White House because of her hatred for Donald Trump. As I suggested yesterday, maybe Trump should instead extend an invitation to the the under-15 Dallas Academy boys team. They beat the professional U.S. women’s soccer team 5-2.

Rapinoe has been wheeled out by the media to demand women get equal pay to the men’s team, despite the vast difference in income that the two different competitions generate.

Rapinoe fits the stereotype of most anti-Trump #Resistance leftists – strange colored hair, an obnoxious sense of self-entitlement and a relentless assertion of having the moral high ground despite having none whatsoever.