My heart goes out to the three Russian women who comprise the Russian rock band, Pussy Riot. They were brutally deceived and used by the Washington-financed NGOs that have infiltrated Russia. Pussy Riot was sent on a mission that was clearly illegal under statutory law. 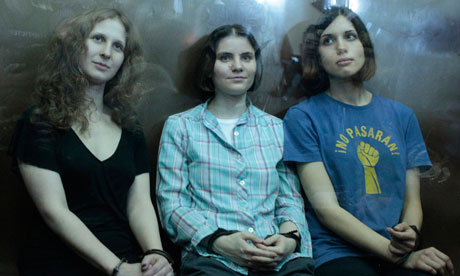 You have to admire and to appreciate the spunk of the women. But you have to bemoan their gullibility. Washington needed a popular issue with which to demonize the Russian government for standing up to Washington’s intention to destroy Syria, just as Washington destroyed Iraq, Afghanistan, and Libya, and as Washington intends to destroy Lebanon and Iran.

By intentionally offending religious worshipers–which would be a hate crime in the US and its European, Canadian, and British puppet states–the women violated a statutory Russian law.

Prior to the women’s trial, Russian President Putin expressed his opinion that the women should not be harshly punished. Taking the cue from Putin, the judge gave the women, deceived and betrayed by the amerikan-financed NGOs, two years instead of seven years.

The women were not waterboarded, raped, or forced to sign false confessions, all well-established practices of amerikan “justice.”

The chances were good that after six months Putin would see that the women are released. But, of course, that would not serve the propaganda of the Amerikan Empire. The instructions to the Washington-financed fifth column in Russia will be to make any government leniency for Pussy Riot impossible.

Washington-organized protests, riots, property damage, assaults on state and religious images by Washington’s Russian dupes can make it impossible for Putin to stand up to nationalist opinion and commute the sentences of the Pussy Riot women.

Distrust of the Russian government and dissension within Russia are what Washington wants. As Washington continues to murder vast numbers of people around the globe, Washington will point its finger at the fate of Pussy Riot. The western bought-and-paid-for presstitute media will focus on Russia’s evil, not on the evil of Washington, London, and the EU puppet states who are slaughtering Muslims by the bucket-full.

The disparity between human rights in the west and in the east is astonishing. When a Chinese trouble-maker sought protection from Washington, the Chinese “authoritarian” government allowed the person to leave for America. But when Julian Assange, who, unlike the presstitute western media, actually provides truthful information for the western peoples, was granted political asylum by Ecuador, Great (sic) Britain, bowing to the country’s amerikan master, refused the obligatory free passage from the UK.

The UK government, unlike the Chinese government, doesn’t mind violating international law, because it will be paid buckets of money by Washington for being a pariah state.

As Karl Marx said, money turns everything into a commodity that can be bought and sold: government, honor, morality, the writing of history, legality. Nothing is immune to purchase. This development of capitalism has reached the highest stage in the US and its puppet states, the governments of which sell out the interest of their peoples in order to please Washington and be made rich, like Tony Blair’s $35 million. Sending their citizens to fight for Washington’s empire in distant parts of the world is the service for which the utterly corrupt European politicians are paid. Despite the wondrous entity known as European Democracy, the European and British peoples are unable to do anything about their misuse in Washington’s interest. This is a new form of slavery. If a country is an amerikan ally, its people are amerikan slaves.

The international attention focused on Pussy Riot, an obscure rock group which apparently has no recordings on the market, demonstrates the complicity of the Western media in US propaganda. Pussy Riot is not the Beatles of the 1960s. I doubt that most of the young people demonstrating in favor of Pussy Riot had ever before heard of the group or have any understanding of how they are being manipulated.

There are so many more important issues on which media attention should be focused. There is Bradley Manning’s illegal detention and torture by the US government. Manning has already been in prison without trial for longer than Pussy Riot’s sentence!

What is Manning’s “crime.” No one knows. Washington accuses him of doing his duty under the US Military Code and revealing the war crime of the “thrill killing” of civilians by US military personnel and of releasing documents to WikiLeaks revealing the mendacity of the US government. In other words, Manning is a hero, and so off he is dragged to the torture chamber.

WikiLeaks Julian Assange, accused of posting on the Internet the leaked documents, is confined to the Ecuadorean embassy in London. The British “human rights” regime refuses to abide by international law and allow Assange, who has been granted political asylum by Ecuador, safe passage. Everyone familiar with international law knows that asylum takes precedence over the other legal claims, especially specious ones.

Washington has armed and financed outsiders to destroy Syria and to break the country up into warring factions. Instead of protesting this heinous act by Washington, the world protests the Syrian government for resisting its overthrow by Washington. I don’t think that even George Orwell imagined that the peoples of the world were this utterly stupid.

In “freedom and democracy” amerika, President Obama refuses to obey a federal court order to cease and desist from violating the clear, unambiguous Constitutional rights of US citizens. Instead, the President of the United States defies the court’s order and continues to hold US citizens in indefinite detention, and there is no movement to impeach this tyrant. To the contrary, amerika is presented as the example of democracy to the world.

Where are the protests?