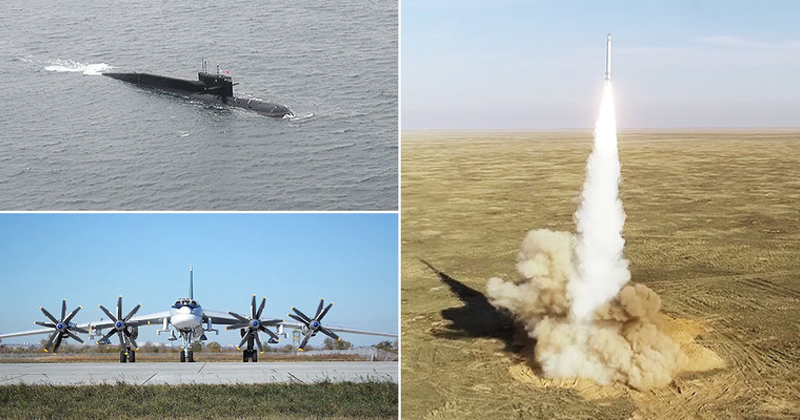 Russia has tested all three components of its nuclear triad, making sure that if the worst comes to pass and its existence is under threat, it would have plenty of ways to respond to foreign aggression.

The simultaneous test of various tactical and strategic nuclear weapons in Russia’s arsenal came as it wraps up a major military exercise called ‘Grom-2019’ (‘Thunder’ in English). It involved some 12,000 troops, hundreds of missile launchers and aircraft, and almost two dozen ships and submarines.

Strategic subs provided by Russia’s Northern and Pacific fleets fired their Sineva long-range strategic missiles at two target ranges located in the Arkhangelsk region in northwestern Russia and in the Far Eastern region of Kamchatka.

The Navy also fired barrages of Kalibr cruise missiles from the Barents Sea and the Caspian Sea.

A Yars intercontinental ballistic missile was fired from a ground-mobile launcher deployed at the military commodore Plesetsk. The nuke traveled some 6,000km east before hitting the intended target in Kamchatka.

In the air, long-range bombers Tu-95MS completed their part of the exercise, firing nuclear-capable cruise missiles at targets in the Komi region in northern Russia and in Kamchatka.

The training was meant to test the Russian military’s capability to organize a country-wide response to a military crisis significant enough to merit the use of nuclear weapons. Russia’s military doctrine says it can happen only if the country is under a nuclear attack or if there’s a massive military invasion that may end its existence otherwise.

President Vladimir Putin in his capacity as commander-in-chief oversaw the exercise from the National Defense Control Center, the Defense Ministry’s main HQ.

Watch Putin Say Globalism Is The Enemy Of Humanity

Russian President Vladimir Putin says that liberalism has “outlived its purpose” and that multiculturalism is “no longer tenable.”