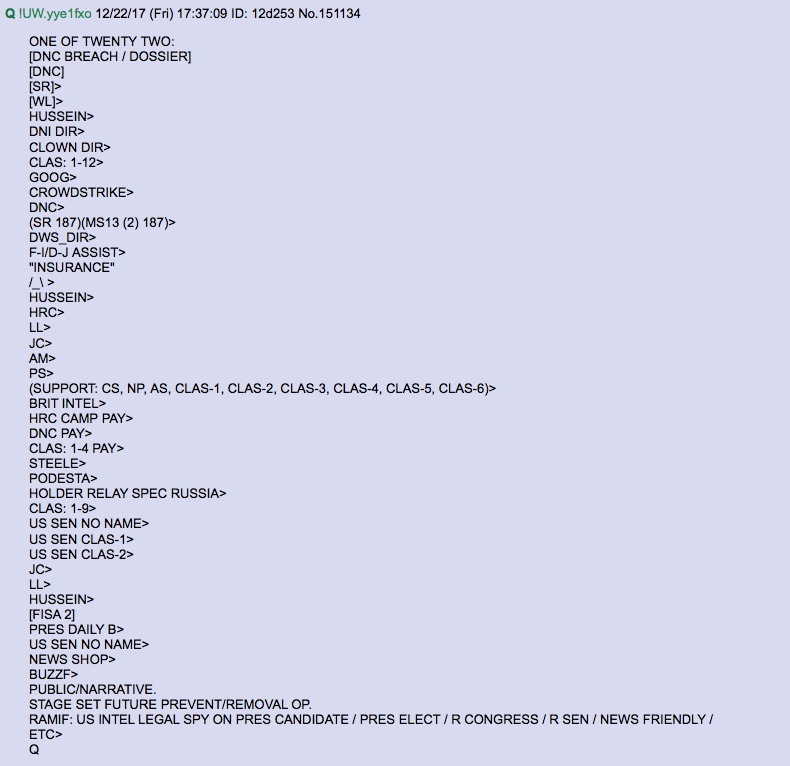 WASHINGTON, D.C. – Last week, on Friday, Dec. 22, QAnon posted a cryptic narrative that the Democrats, including President Barack Obama, conspired with the FBI, the DOJ, and various U.S. intelligence agencies, including the Director of National Intelligence and the CIA, to prevent Donald Trump from being elected president, or to remove him from office should he be elected president.

QAnon referenced the Executive Order that President Trump signed on Dec. 21, and the link to Google’s Eric Schmidt announcing his resignation as head of Google’s parent, Alphabet, Inc.

According to the cryptic QAnon narrative, Schmidt played a major role both in Hillary Clinton’s 2016 presidential campaign and in the subsequent conspiracy to promote the CrowdStrike analysis of the DNC email heist and the Fusion GPS dossier that attempted to establish the basis for arguing Trump colluded with Russia to win the election.

At key points throughout the QAnon timeline, Google’s Schmidt reappears as: the person responsible for developing Clinton’s campaign computer technology, a major funder of the Clinton campaign, a common link to Perkins Coie, the Seattle-based law firm that laundered for the Clinton campaign and for the DNC payments to Fusion GPS which were essential to develop the dossier.

QAnon directly suggests that the heist of DNC emails, including the emails from Hillary campaign chair John Podesta, was an inside job perpetrated by Seth Rich, an IT employee of the DNC who became disillusioned with Hillary and the DNC. Rich realized Hillary and Debbie Wasserman Schultz had rigged the Democratic primaries for his preferred candidate, Bernie Sanders, to lose.

Shockingly, QAnon claims Debbie Wasserman Schultz put out a contract to MS-13 Hispanic gang members to murder Seth Rich, both to punish him for the heist, and to prevent him from doing further damage to Hillary’s campaign and the DNC.

The QAnon timeline suggests Clinton loyalists shifted their focus from the CrowdStrike analysis to the Fusion GPS dossier, after WikiLeaks published Vault 7, demonstrating the CIA had the technology to make a CIA data-hack look like the Russians were responsible for the crime.

The conspiracy to frame Trump with Russian collusion, that began with Clinton’s campaign and the DNC, involved a group within the FBI and DOJ that quickly recruited the Director of National Intelligence James Clapper and CIA Director John Brennan.

Among the FBI and DOJ co-conspirators, QAnon names former Attorneys General Eric Holder and Loretta Lynch, as well as key FBI operatives including Andrew McCabe and Peter Strzok, recently the focus of congressional inquiry as a result of emails exchanged by Strzok and Lisa Page, his extramarital lover, in which the two express their hatred for Trump.

When the conspiracy reached the Oval Office, QAnon accuses President Obama of authorizing the use of the Fusion GPS dossier to obtain FISA court approval to conduct electronic surveillance on then GOP presidential candidate Donald Trump and key members of his campaign, with the electronic surveillance continuing through the transition period.

With President Obama’s approval information gathered from the FISA court-approved electronic surveillance was unmasked, with information about named members of Trump’s team leaked to the mainstream media.

The QAnon timeline decoded also implicates Sen. John McCain as playing a role in the conspiracy by serving as the go-between who brought the Fusion GPS dossier to FBI Director Comey, and by subsequently peddling the document to the press. 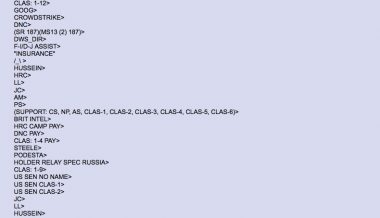