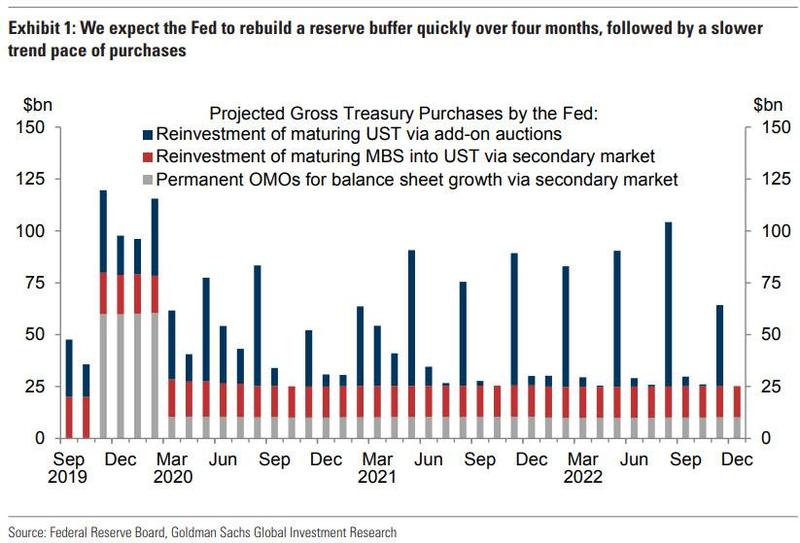 Just one day after we laid out what Goldman’s revised forecast for the Fed’s “NOT A QE” will look like, which for those who missed it predicted that the Fed would announce “monthly purchases of about $60BN for four months, split across Treasury bills and short maturity coupon Treasuries, in order to replenish the roughly $200bn reserve shortfall and support the pace of growth in non-reserve liabilities”, the Fed has done just that and moments ago – well ahead of consensus expectations which saw the Fed making this announcement some time in November – the US central bank announced it would start purchasing $60BN in Bills per month starting October 15. This will be in addition to rolling over “all principal payments from the Federal Reserve’s holdings of Treasury securities and the continued reinvestment all principal payments from the Federal Reserve’s holdings of agency debt and agency mortgage-backed securities received during each calendar month.”

In short, the proposed schedule is virtually identical to the one Goldman “proposed” yesterday, one which sees the Fed purchase a grand total of $100BN or so in TSYs the near term, and one which is meant to “engineer a one-off level shift of roughly $200bn over the course of four months.”

But wait there’s more, because just as today’s surprising spike in repo use suggested, mere “NOT A QE” may not cut it, and just in case, in order to provide an “ample supply of reserves”, the Fed will continue with $75BN in overnight repos and $35 billion in term repos twice per week, “at least through January of next year.”

Where the Fed’s announcement differs from Goldman’s proposed POMO schedule, is that this appears to be a far more aggressive form of “NOT A QE” because as the Fed notes it will continue well into the second quarter of 2020, meaning it will last beyond the 4 months proposed by Goldman, to wit: “in light of recent and expected increases in the Federal Reserve’s non-reserve liabilities, the Federal Reserve will purchase Treasury bills at least into the second quarter of next year in order to maintain over time ample reserve balances at or above the level that prevailed in early September 2019.”

The Fed’s proposal indicates that between the continuation of repo operations, and the net $60BN balance sheet expansion, the Fed’s balance sheet will reach roughly $4.2-$4.3 trillion some time in Q2 2020. 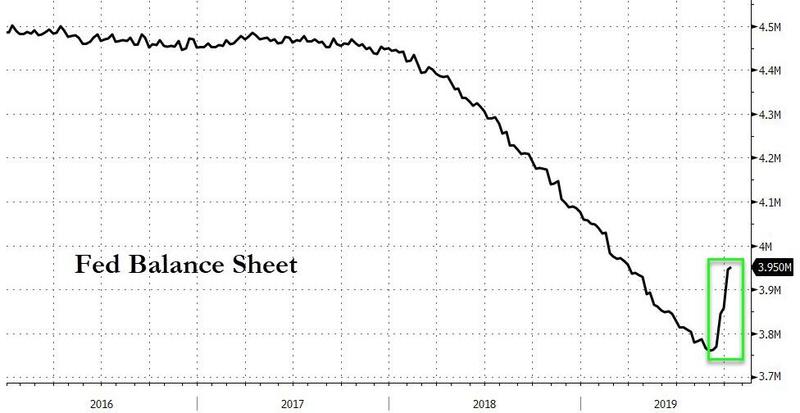 Here is the full statement from the Fed explaining all of the above:

In light of recent and expected increases in the Federal Reserve’s non-reserve liabilities, the Federal Open Market Committee (FOMC) directed the Desk, effective October 15, 2019, to purchase Treasury bills at least into the second quarter of next year to maintain over time ample reserve balances at or above the level that prevailed in early September 2019. The Committee also directed the Desk to conduct term and overnight repurchase agreement operations (repos) at least through January of next year to ensure that the supply of reserves remains ample even during periods of sharp increases in non-reserve liabilities, and to mitigate the risk of money market pressures that could adversely affect policy implementation.

So with a combined firepower between POMO and Repo in the $100s of billions per month, someone will still have the gall not to call this QE 4 “NOT A QE”?

Why yes: the Fed itself, because the last thing the Fed needs is for pundits to start asking question why Powell is launching QE when the economy is supposedly stable (and just weeks after Trump said the Fed should do “some QE”), to wit:

These actions are purely technical measures to support the effective implementation of the FOMC’s monetary policy, and do not represent a change in the stance of monetary policy.

The Federal Reserve and the central banking system are working against the Trump economy in an effort to seize any economic progress back under their control.