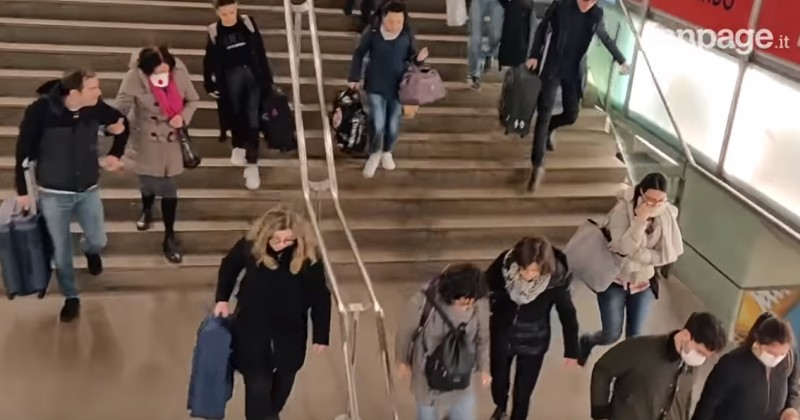 A leaked plan to quarantine northern Italy spectacularly backfired, sending thousands of people into a panic as they tried to flee, potentially making the spread of coronavirus even worse.

The plan to quarantine more than 16 million people, preventing them from leaving the whole of Lombardy, including the financial capital of Milan, prompted a mass evacuation as train stations and other transport hubs were deluged with travelers.

The order was set to take effect on Sunday, but it was leaked late Saturday afternoon by the media, prompting a huge exodus.

“Packed bars and restaurants quickly emptied out as many people rushed to the railway station in Padua,” reports SCMP. “Travellers with suitcases, wearing face masks, gloves and carrying bottles of sanitising gel shoved their way on to the local train.”

In the south of the country, police officers wearing medical suits were dispatched to train stations to test the new arrivals.

Italian virologist Roberto Burioni lamented that the only impact of the quarantine order was to make the situation worse.

“The draft of a very harsh decree is leaked, sparking panic and prompting people to try and flee the [then] theoretical red zone, carrying the virus with them,” he wrote on Twitter. “In the end, the only effect is to help the virus to spread. I’m lost for words.”

The pandemonium ensued as Italy revealed that virus deaths had risen 50% in just 24 hours, with 366 total fatalities. Italy now has a total confirmed 7,375 cases of coronavirus, more than any country outside of China.

“Under the decree police and armed forces will patrol Lombardy’s access points, such as train stations and motorway entrances and exits, as well as border areas of the 14 provinces under lockdown across Emilia-Romagna, the second-worst outbreak zone, Veneto and Piedmont,” reports the Guardian.

The quarantine decree will remain in place until at least April 3rd. Anyone caught breaking it faces three months in jail.

Footage from Milan train station where suddenly people arrive to flee from the possible quarantine zone pic.twitter.com/gj52lSQgWZ (via @amos8125) #Covid19