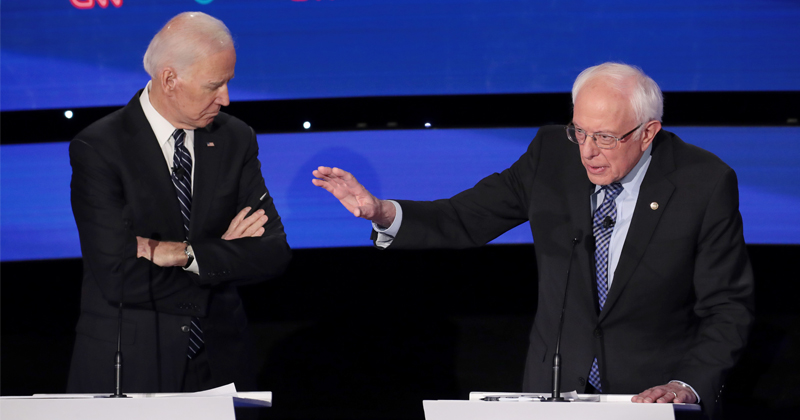 The brewing battle between Bernie Sanders and Joe Biden is heating up, as The Hill reports that the 78-year-old Vermont Senator is looking for a ‘one-on-one battle’ with the 77-year-old former Vice President.

The beef between Sanders and Biden came to a head this week after Sanders accused Biden of supporting cuts to Social Security, while Biden hit back – claiming Sanders is mischaracterizing his position.

And while most polls still have Biden as the 2020 Democratic frontrunner, a national CNN poll released Wednesday had Sanders at 27% vs. Biden at 24%, while Elizabeth Warren (D-MA) came in a distant third at 14%.

A Biden confidant said the campaign sees Sanders as its biggest rival at the moment, even as polls of Iowa and New Hampshire find a tighter four-candidate race between Biden, Sanders, Warren and former South Bend, Ind., Mayor Pete Buttigieg.

“For now at least it’s trending that way,” said the Biden insider. “It looks like Warren and Pete have peaked.”

After struggling to reach people of color in the 2016 Democratic primary, Sanders has markedly improved his standing among nonwhite voters and is now challenging Biden at the top. –The Hill

Meanwhile, Sanders national campaign co-chairman Nina Turner wrote in an op-ed last week in South Carolina’s “The State” that Biden “has repeatedly betrayed black voters to side with Republican lawmakers and undermine our progress,” according to The Hill.

Apparently the pressure is catching up to Biden – who mocked and berated a CBS journalist who asked about the feud.

WATCH: After a campaign event in Mason City, Iowa, @joebiden reacts to @edokeefe's question about his ongoing feud with @berniesanders: "Calm down, it's okay." https://t.co/a2hmMbnjnf pic.twitter.com/ymOMWRR2zP