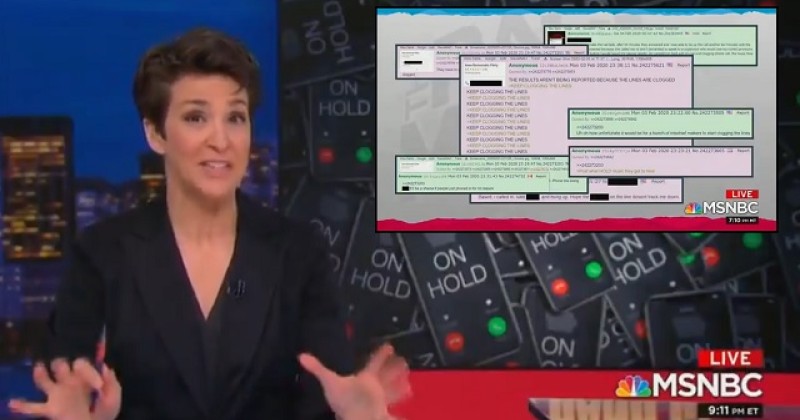 Rachel Maddow blamed anonymous messageboard 4Chan for the debacle in Iowa, claiming that a handful of calls ‘clogged up’ the Iowa Democratic Party phone lines.

The delay in reporting the results of the Iowa caucus was blames on “reporting issues” related to an app called Shadow which is owned by Buttigieg supporter Tara McGowan.

However, this didn’t stop Maddow from claiming that 4Channers were to blame for calling Democratic Party phone lines to sow confusion, despite it being acknowledged that this occurred after the problem with the app had been made public.

Maddow was in top form tonight.

She claimed that a few 4 chan posts urging ppl to "clog up" the Iowa Democratic Party phone lines messed with "Democrats' ability to carry out the caucus."

Firstly, the caucus was over, and Dems had to call in because their other tech failed… pic.twitter.com/VzvP8kr54b

“Firstly, the caucus was over, and Dems had to call in because their other tech failed,” the Daily Caller’s Chuck Ross noted. “But even crazier, Maddow compared all of this to the 2002 New Hampshire phone jamming scandal, in which, completely unlike Iowa, GOP operatives robo-called Democrats’ get-out-the-vote call centers *before* a Senate election.”

Ross accused Maddow of engaging in “pure disinformation” in front of an audience of millions.

The MSNBC host made the bizarre claims despite her own colleagues at the network debunking 4chan’s involvement earlier in the day.

Oddly, MSNBC actually had good coverage of this earlier this morning pic.twitter.com/Vsp66CtKC3

Just be glad that Maddow didn’t blame “Russian bots” for the shambles as many on Twitter did earlier this week.