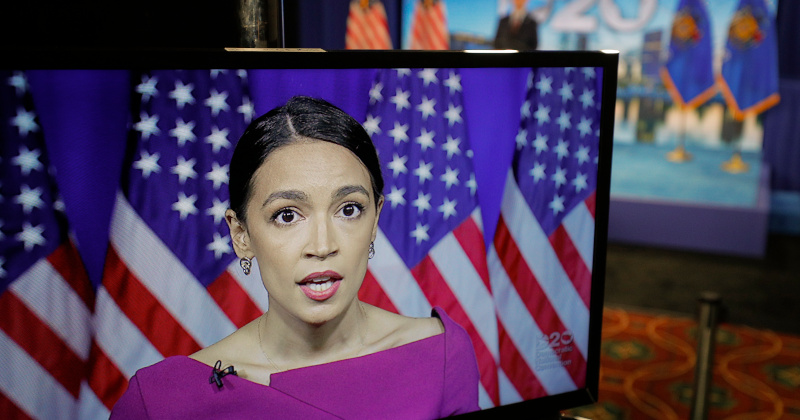 Zoom-like video chats and inspiring music videos — the opening night of the Democratic convention on Monday was unlike any of its predecessors in US history.

Party leadership had to turn the originally planned big party in Milwaukee, Wisconsin, into an entirely virtual event because of the coronavirus pandemic.

While the reasoning behind that decision was accepted by almost everyone in the party, the list of speakers who would contribute to the four-night event via live interviews or pre-recorded video messages has been a point of contention.

The main attractions are clear: Joe Biden and Kamala Harris will be giving speeches in which they accept their nominations as the Democratic candidates for president and vice president, respectively. Widely treasured former First Lady Michelle Obama and the current Speaker of the House of Representatives Nancy Pelosi are no-brainers as well.

But when it was revealed that Representative Alexandria Ocasio-Cortez, who has gained national fame for her outspokenness and progressive policy ideas like the Green New Deal, would only get one minute to speak, progressive Democrats were outraged.

They claim that the Democratic establishment is treating one of their own with disrespect, and criticize that AOC, as she is known, is one of an already small number of speakers who don’t fall into the moderate camp within the party. A petition titled “Let AOC speak” gathered more than 6,700 signatures before AOC’s appearance Tuesday night. “Rep. Alexandria Ocasio-Cortez is one of the Democratic Party leaders who is most respected by young Democrats and progressives,” the petition states.

“She is one of only three Latinx speakers scheduled for the Democratic National Convention. She is one of two convention speakers under the age of 50. Yet, she is only being allotted 60 seconds to speak… This is unacceptable.”

The Democrats: One party, many views

The convention discussion is emblematic for the Democrats as a whole: While the US has a two-party system that always sees one of the two big parties in power, the Democratic party basically consists of a coalition between different ideological groups.

On one end of the spectrum, you have moderates like Joe Biden, who hope to appeal to a centrist section of US voters. On the other, farthest left end, you have progressives like Bernie Sanders and Ocasio-Cortez.

Many of their supporters feel left out by the convention proceedings, after already not being overly enthused by Joe Biden as the party’s presidential candidate. Alan Minsky, the executive director of the grassroots organization Progressive Democrats of America, said it’s concerning if the convention’s message is “to marginalize AOC.”

@AOC is the rising star of the Democratic Party. Among young Americans, her popularity is astronomical. @TheDemocrats need young people to vote this fall. The Party would be better served giving her 60 minutes not 60 seconds to speak at the @DNC

“What I worry about is if they disregard the progressive wing of the party,” Minsky told DW. “They would be going at it with the same strategy as in 2016, trying to pull swing voters from the middle, and that was a losing strategy.”

Minsky is referring to Biden’s efforts to win over some former Trump voters. To that end, the first night of the convention saw a few Republicans like former Ohio governor, John Kasich, speak about why they would vote for the Democratic nominee instead of President Donald Trump. Minsky and other progressives have been incensed about the fact that Republicans are getting more time to speak than one of their own.

The convention issue reinforces the concern that Biden and his vice presidential nominee Kamala Harris aren’t doing enough to win over young voters, who are notoriously difficult to get to the polls. Many of them supported Sanders’ campaign and are fans of AOC, but feel less excited about Biden. Democrats cannot afford to disregard them, Minsky said.

Spencer Critchley calls himself a “progressive who believes in progress” or a “radical moderate.” The former campaign adviser for Barack Obama said Biden and Harris cannot appeal to only one segment of the party. “They must build a winning coalition,” Critchley told DW.

He believes that Sanders has played a big role in moving Democrats’ political positions further to the left over the last years and that the party is pretty progressive already. Now, according to Critchley, is the time for compromise, which is why he thinks including Republican speakers in the convention proceedings was a smart idea.

“If we can bring in conservatives of conscience, we should,” Critchley said. “Progressives are often too much into ideological purity. They should keep their eye on the ‘progress’ part of progressive. And you start making progress by winning elections.”

Trump is a ‘giant asteroid heading toward Earth’

Losing the election would mean four more years of Trump — and nothing brings people together like a shared enemy. “Donald Trump is essentially the giant asteroid heading toward Earth,” Critchley said. “That unifies people.”

Case in point: Democrat Cori Bush, a progressive candidate for Congress from Missouri, who told public broadcaster NPR that she has been a Sanders supporter since 2015.

“But I understand right now that Senator Sanders is not the nominee,” she said. “So even though I don’t agree with everything that Joe Biden is pushing and standing for, I do realize that Donald Trump and his administration is hurting my community, hurting communities all across this country in ways that have set us back so far.”

Progressive Democrats have also made it clear, however, that for them the fight won’t end with a potential Biden inauguration come January 2021. “We are going to be huge team players” in supporting Biden, Minsky said. “And then, once the election happened, we are not going to be shy about pushing for progressive policies.”