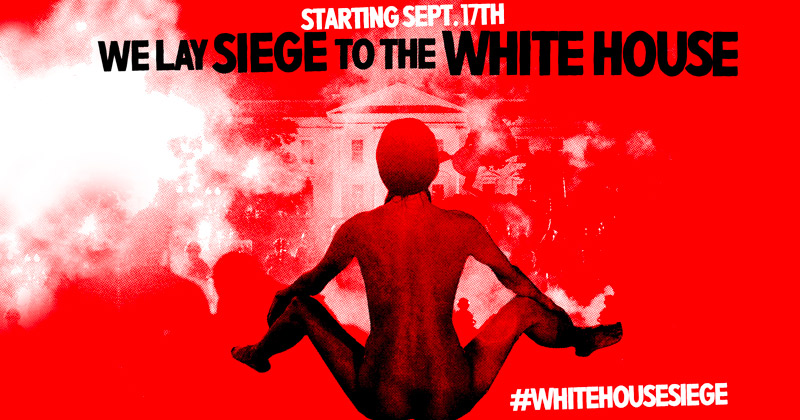 A radical leftist organization has announced a weeks-long siege on 1600 Pennsylvania Avenue by releasing an ad featuring the White House engulfed in flames.

Accompanying a new “tactical briefing” from the far-left organization “The Blackspot Collective,” the ad depicts a nude woman, dubbed “Naked Athena” by BLM protesters, spreading her legs as she faces toward the direction of the front lawn with the White House visible amid fire and smoke.

An announcement on AdBusters.org promoting the hashtag #WhiteHouseSiege calls for activists “to be there in the hundreds of thousands… to remind this authoritarian regime of our significance, our will, and our power.”

“Phase One runs from Occupy’s ninth anniversary, September 17th, to Election Day — a fifty-day siege on the White House,” the announcement states. “This is the #WhiteHouseSiege. And, if need be, we will be ready to reconvene at any time after that to ensure the peaceful transition of power.”

According to Facebook, AdBusters is a Vancouver-based magazine representing a global collective “of activists writers artists designers hackers tricksters poets philosophers and punks” who believe they are “fighting back against the hostile takeover of our psychological, physical and cultural environments by commercial forces.”

As pointed out at BigLeaguePolitics.com, it’s interesting that Facebook is allowing the “ANTIFA-style group to organize a potentially violent ‘White House siege’ next month on their platform,” especially as it censors non-violent, anti-child trafficking hashtags like #SaveTheChildren.

It wants one thing. Total power and control. What would that spider say if it was made to take truth serum? Find out in this exclusive report from Alex Jones.