Popular radio talk show host Mark Levin has again come out against Ron Paul. In an interview conducted by The Daily Caller, Levin said that if Paul is nominated to run against Obama, he will write in a candidate because Paul is not a “conservative.”

Earlier this month Levin called Paul a is racist “lunatic” who supports terrorist groups and hates Israel. He promised to use the bully pulpit of his radio show to defeat Rand Paul in Kentucky if his father decides to run as a third party candidate.

Levin, who has over 8 million listeners weekly, said during the interview he will vote for Romney, although he does not define the candidate as a conservative or a “capitalist.” 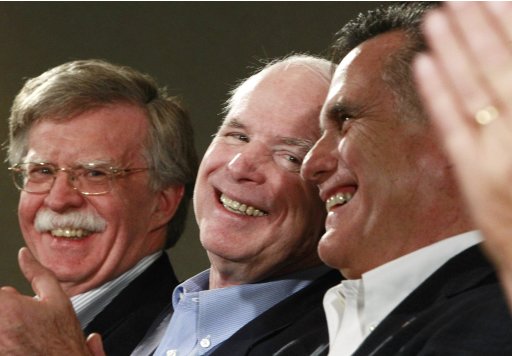 Staunch neocon Walid Phares is advising Romney on Middle East policy. Phares, now affiliated with the National Defense University, was an outspoken advocate of the U.S. invasion of Iraq. In 2009, Phares made the claim Iran will soon have missiles capable of reaching the United States.

Earlier this month, Bush’s former United Nations ambassador, John Bolton, endorsed Romney for president. Bolton has admitted that an attack on Iran under the pretense of taking out its nuclear program will lead to a wider conflict in the region. He “dismissed the costs as worth the effort,” according to to the National Iranian American Council.

During a previous Republican presidential campaign in 2007, McCain modified a Beach Boys song at Murrells Inlet in South Carolina. “Bomb, bomb, bomb, bomb Iran,” he sang to appreciative laughter from an audience of Republican supporters.