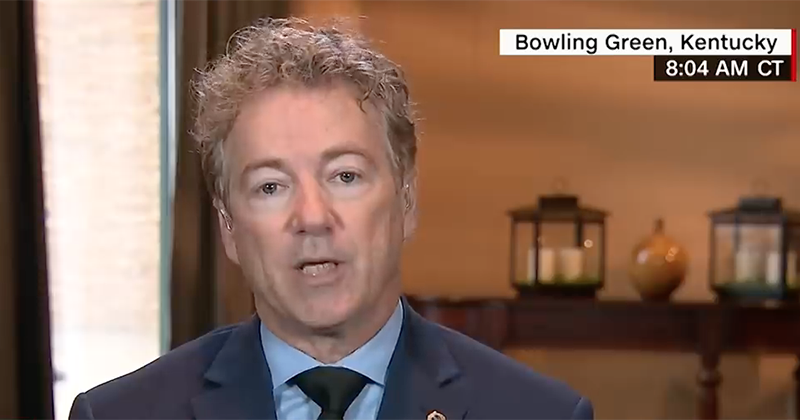 Senator Rand Paul warned Sunday that the Democrats’ vendetta against the President, and their obsession with impeachment could end up destroying the country.

“You know, we’ve seen the evidence. We’re going to hear the evidence repeated, but we won’t see any new evidence so I think all of America has seen this. We’ve found this is a very partisan exercise.” Paul said, appearing on CNN’s State of the Union.

“So I think what we’ve seen is it is just a very partisan thing. This is a disagreement. The people on the Democrats side they don’t like Trump and his demeanor, so they have decided to criminalize politics.” Paul declared.

“I don’t think it’s a good day for the country. I think it’s a sad day because I hope it doesn’t devolve into that every president like in different parts of Latin America where we either impeach or throw presidents in jail because we don’t like their politics. I think that will really dumb down and destroy the country.” Paul asserted.

Elsewhere during the interview, host Jake Tapper was triggered into attack mode when Paul argued that President Trump’s phone call to the Ukraine was part of his duty to uphold a mandate from Congress to ensure foreign aid is being used correctly.

“This isn’t about the Constitution or the president breaking the Constitution. Foreign aid is always contingent upon behavior. In fact, the money we gave them to give to Ukraine, it says specifically in the law he has to certify that they are less prone to corruption. I mean, he was instructed by Congress to do exactly what he asked to be done.” Paul argued.

“So you’re saying that you think that President Trump was actually doing this because he was combatting corruption?” Tapper asked, before continually interrupting the Senator with “examples” of Trump not caring about corruption.

“I think it’s based on opinion,” Paul responded, to Tapper’s ‘facts’.

Articles of impeachment are expected to be passed through the House before the end of the week. The House has yet to set a specific date for the full impeachment vote, but two Democratic leadership aides have indicated that it could happen on Wednesday.