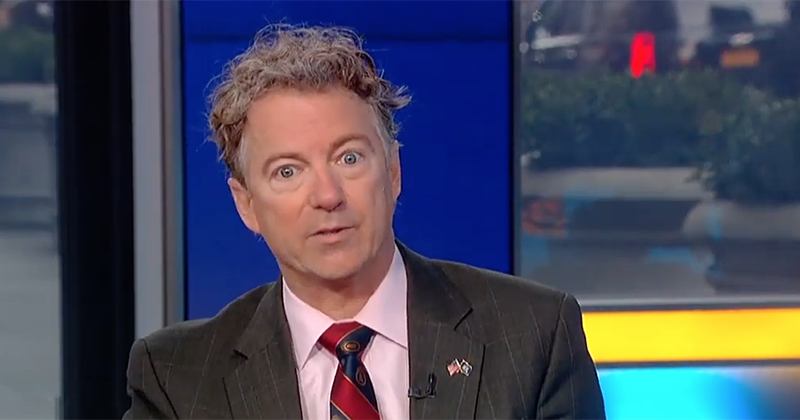 Senator Rand Paul weighed in on the stand off regarding the upcoming State of The Union address, suggesting that if Nancy Pelosi is unwilling to allow it to happen in the House, then it should be moved to the Senate and go ahead without her and the Democrats.

“Senator McConnell is in charge of the Senate,” Paul tweeted Thursday morning. “If Mrs. Pelosi refuses to allow the president to deliver the State of the Union in the House, I propose we move it to the Senate and make it happen!”

Senator McConnell is in charge of the Senate. If Mrs. Pelosi refuses to allow the president to deliver the State of the Union in the House, I propose we move it to the Senate and make it happen!

Following up during an interview on Fox & Friends, Paul said “This would be the first time in history that the House would deny the president a forum of speaking.”

“If she is going to do that, let’s hold it in the Senate.”

Paul was appearing to tout a bill he has introduced aimed at preventing future lengthy government shutdowns.

Following Senator Paul floating the idea of an address delivered from the Senate floor, CBS reported that The White House was seriously considering the possibility.

Top White House officials are discussing whether the GOP-controlled Senate could invite President Trump to deliver the State of the Union address. https://t.co/VmLrU3fcCB

Pelosi has made it clear that until the government is fully reopened, she will not issue the invitation for Trump to deliver the speech in the House. Pelosi has suggested that Trump should “consider delivering your State of the Union address in writing to the Congress on January 29th.”

News: @SpeakerPelosi letter to President Trump suggesting he move State of the Union until after government re-opens – or submit his speech in writing instead – due to Shutdown effect in DHS and Secret Service, via @FoxReports & @arogDC: pic.twitter.com/CPMvjm7shr

The ‘security concerns’ Pelosi cited as a reason to postpone the address seemed to have stemmed from a single furloughed DHS employee:

Pelosi spox: The Office of the Spkr has been contacted by a furloughed DHS employee who expressed serious concerns that the dept has insufficient staffing levels to sufficiently manage the security needs for the upcoming State of the Union..due to furloughs of critical staff

It’s clear that Pelosi, who has also stated unequivocally that she will not budge on funding for Trump’s proposed border wall, is playing politics.

Really? And who pray tell was this conscientious employee? So she will believe this anonymous furloughed employee over word of Secret Ser. And DHS? Please! Another Pelosi fabrication.

"A furloughed DHS employee" is the new woke six-year-old. https://t.co/rvGfbvW321

Fox News's John Roberts says a DHS official told him that no one from Pelosi's office called the Secret Service to ask if they had concerns about SOTU before she sent that letter. #StateoftheUnion #GovernmentShutdown

.@SpeakerPelosi says secret service COULD secure State of the Union, but they shouldn’t have to while not getting paid.

“They’re professionals. They train for this. They should be paid for this.” pic.twitter.com/U926sol7O3

Just asked Pelosi if she's simply trying to deny Trump a platform after DHS said it could secure SOTU, and she said: "I'm not denying him a platform at all…Let's pay the employees. Maybe he thinks it's OK not to pay people who do work. I don't, and my caucus doesn't either." pic.twitter.com/RODDSMihbK

In response to Pelosi’s antics, Trump wrote his own informing the speaker that her scheduled trip overseas will be postponed in light of the government shutdown.

The President did this one hour before Pelosi and her team was to leave, forcing Democrats to literally circle around the Capitol on a bus and then get back off it.

USAF bus back on Capitol plaza. Mbrs getting off bus & going back into Capitol pic.twitter.com/k9luYw5YyC

Trump even had Pelosi’s luggage returned to her office by cart:

Pelosi’s luggage was sent back to her office after Trump cancelled her trip.

Democrats, along with MSNBC and CNN immediately went into full on attack mode, blaming Trump for playing politics:

However, House Minority Leader Kevin McCarthy slammed Pelosi for even considering traveling abroad in what is now the fourth week of the partial government shutdown.

“Why would she want to go overseas with government shut down, with people missing their paychecks? And if we don’t get this back open they could miss their paycheck again by next week, so I think it’s appropriate that we would get back together. It would not take long, and we could solve this problem,” McCarthy told reporters on Capitol Hill.

House Minority Leader Kevin McCarthy reacts to President Trump withholding a military plan for Speaker Nancy Pelosi’s congressional trip: “Why would she want to go overseas with the government shutdown? … I couldn’t imagine she would even think about going” pic.twitter.com/zDnsi8wNPg

In a further Fox appearance, Rand Paul said that he fully supports Trump’s action in canceling Pelosi’s trip, and that the Speaker has to be willing to compromise on border wall funding.