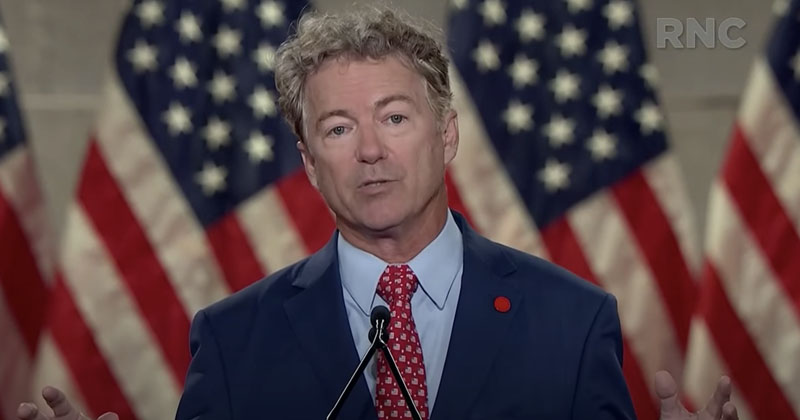 Kentucky Senator Rand Paul (R) praised President Trump during his RNC speech Tuesday night, pointing that he’s been the first president “in a generation” who hasn’t started a new war on behalf of the military-industrial complex.

“I’m supporting President Trump because he believes as I do that a strong America cannot fight endless wars,” Paul said. “We must not continue to leave our blood and treasure in Middle East quagmires.”

“President Trump is the first President in a generation to seek to end war rather than start one. He intends to end the war in Afghanistan. He is bringing our men and women home.”

Paul then invited the audience to compare Trump’s anti-war record with Joe Biden’s hawkish foreign policy record as vice president, who voted for the Iraq War and the numerous other wars launched in Syria, Libya, and elsewhere.

“Compare President Trump with the disastrous record of Hillary Clinton or Joe Biden, who consistently called for more war,” Paul said. “Joe Biden voted for the Iraq War, which President Trump has long called the worst geopolitical mistake of our generation.”

“I fear Biden will choose war again,” Paul continued. “He supported war in Serbia, Syria, and Libya. Joe Biden will continue to spill our blood and treasure. President Trump will bring our heroes home.”

“If you hate war like I hate war…if you want us to quit sending $50 billion to Afghanistan for luxury hotels and natural gas to stations…you need to support President Trump for another term!”

A plan decades in the making. KGB defector Yuri Bezmenov issued a chilling warning about the Democrat communist infiltration of America and the destruction of our country. Know your history or be doomed to repeat it!