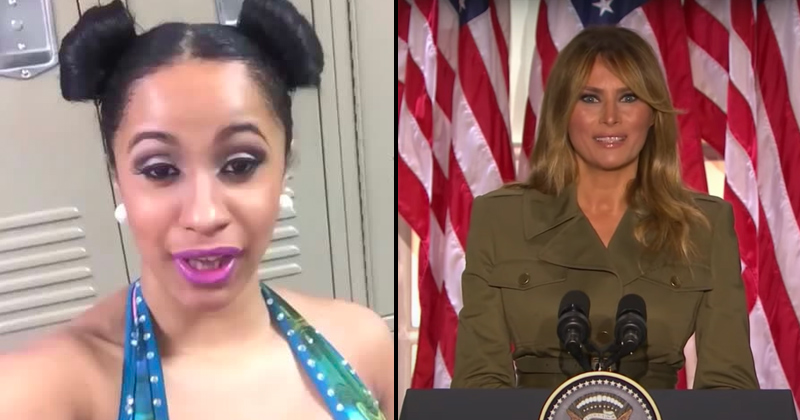 Multi-platinum rapper Cardi B attacked the First Lady of the United States Melania Trump, suggesting the former Slovenian model was at one time a prostitute.

The “Bodak Yellow” singer with over 12 million followers then replied, “Didn’t she used to sell that Wap?” a reference to her recent song of the same title, an acronym representing the obscenity “Wet-Ass Pussy.”

Didn’t she used to sell that Wap? https://t.co/ahgIf96S6a

In a follow-up tweet, the stripper-turned-singer, who at one time admitted to drugging then robbing men, attached a nude photo of Melania Trump which she captioned, “This pic giving me ‘ yea you fuckin wit some wet ass pussy ‘ vibes …just sayin.”

As far as the accusation goes, Melania Trump has never engaged in prostitution, and sued the British tabloid the Daily Mail in 2016 after accusing her of being a sex worker during the 1990s.

“The newspaper agreed to pay damages and apologised to the First Lady in April 2017,” reported the BBC.

Interestingly, it’s been theorized the very photo used by Cardi B to attack the First Lady may have been leaked by her husband, then-candidate Donald Trump, during the run-up to the 2016 presidential election.