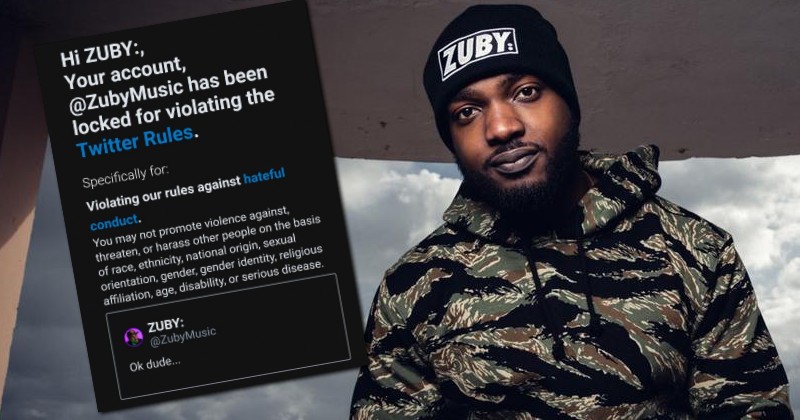 Rapper Zuby was suspended by Twitter for tweeting “Ok dude” at a transgender woman who calls herself the ‘Pronoun Enforcer’ and the temporary ban was celebrated by the left-wing activist.

“I’ve been temporarily locked out of Twitter for tweeting ‘OK dude’ in response to someone,” Zuby posted on his Instagram page. “Apparently that violates the ‘hateful conduct’ policy. Wow… I’ve appealed it.”

I've been temporarily locked out of Twitter for tweeting 'OK dude' in response to someome. Apparently that violates the 'hateful conduct' policy. 🤷🏿‍♂️ Wow… I've appealed it.

The person who reported Zuby, an Antifa activist called Emily Gorcenski who goes by the handle ‘Pronoun Enforcer’, then claimed credit for the suspension, tweeting, “Lol misogynist down. Pronouns enforced.”

Gorcenski, a biological male who now identifies as a woman, had apparently claimed that she slept with more women than Zuby.

Zuby was suspended despite “dude” being a word so commonly used that it can apply to women as well as men.

Emily Gorcenski has gained a large following on Twitter for her antifa doxing activism. She is open about her radical far-left views, even attracting the online support of Dayton antifa militant, Connor Betts. Betts went on to kill nine last year in a shooting massacre. pic.twitter.com/IS6p1LuqB5

“Does twitter expect us to do gender checks of the people we respond to? Are we not allowed to use blanket terms like “guys” or “dude”?” asked Robby Starbuck.

Does twitter expect us to do gender checks of the people we respond to? Are we not allowed to use blanket terms like "guys" or "dude"?

Others tweeted the hashtag #FreeZuby to draw attention to the absurdity of the ban.

Zuby has been a target for LGBT outrage mobs ever since he announced that he identified as a woman in order to break all the women’s weightlifting records.