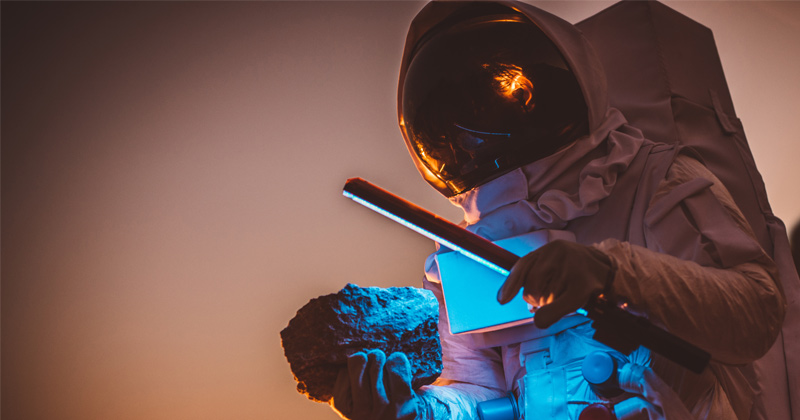 Health problems are inevitable in space. You can develop cancer, lose muscle tone or suffer memory loss. The list is long, but the Red Planet appeal is strong. Do you have what it takes to survive a 6-month space trip to Mars?

NASA wants humans on Mars by 2035. Scientists are convinced the planet holds all the resources needed to establish a human colony, including water below the surface, and several sources of evidence to support the fact that there were once living creatures on the Red Planet.

However, from Earth to Mars there’s a six-month trek inside a spaceship. Although the experience can literally be described as out-of-this-world, there’s a long list of challenges associated with this trip. The people making this journey will have their names carved into history, but first they’ll have to face health risks nobody has ever faced before. Do you think you could have the mental and physical ability to cope with such journey?

The dangers of radiation: When sun cream is not enough

The first challenge in your trip is radiation. You can’t see it, and you can’t feel it, but rest assured that you’re constantly getting bombarded by radiation. And this is not the kind of radiation we have on Earth, which can be blocked with a decent sun cream. Some forms of radiation in space can collide quite violently with everything in their path, tearing through plastic, metal and skin.

Virtually any part of your body is susceptible to radiation damage. Cancer is certainly one of the main worries, but there’s a myriad of other health problems, including cardiovascular problems, cognitive impairment and memory issues, to name just a few.

However, it’s not all doom and gloom. Researchers are working on ways to offer some protection against radiation, including new materials to block it, as well as innovative pharmaceutical approaches which may be more effective than shielding. One example already in operation is the Radiation Assessment Detector, which has been sent to Mars specifically to prepare for future human exploration. This device measures radiation in Mars, including not only from space but also any radiation derived from the interaction with the atmosphere and ground.

No gravity is dangerous to bones and muscles

Your second challenge is the lack of gravity. Both during spaceflights and on any future colonies in Mars, you will be exposed to a gravitational field much “lighter” compared to what we have on Earth.

It may sound fun to float around in zero-gravity, but this can be incredibly dangerous for your bones and muscles. Studies have found that after just 3 weeks in space, some muscles can shrink by as much as a third, and during longer missions, astronaut’s physical capacity decreased by 30 to 50%. All this because blood vessels are not as effective at transporting oxygen to the working muscle while in space. In practical terms, this means you should expect to get tired easily and to struggle to perform even the simplest tasks during your trip to Mars.

NASA recommends a 2-hour workout every day, but there’s another possibility which may appeal to many would-be astronauts. Researchers had very positive results with resveratrol, an anti-oxidant found in red wine, and suggest that a moderate daily dose could help mitigate muscle loss while in Mars.

Low gravity also messes up with blood circulation, as some astronauts stationed on the ISS found out. On Earth, gravity takes care of pushing blood down from the heart to the rest of the body, but in microgravity, however, blood doesn’t move the same way. For example, researchers found problems in blood circulation in several astronauts after just 50 days in space, with one of them even developing a case of thrombosis. There is no solution for this problem yet, but the high number of astronauts experiencing these problems is enough to warrant some further research.

Another problem with microgravity is that it can weaken how your body fights an infection. On your way to Mars, you may find yourself fighting unusual allergies and dealing with rashes you never had before. Standard measures such as vaccines and good nutrition go a long way to boost the immune system, and this is typically combined with using only pasteurized food and drink and strong air filters to help prevent spread of diseases. But even such efforts don’t seem to be enough and researchers continue to work on ways to mitigate these problems.

Microgravity can also affect your gut microbiome. For example, long periods aboard the International Space Station (ISS) were enough to wreck astronaut Scott Kelly’s gut microbiome, when compared to his Earth-bound twin brother Mark Kelly. Luckily these changes weren’t permanent, and, it may be that, when you set foot on a spaceship to initiate your journey to Mars, you already carry a long list of pre-, pro- and post-biotics to counteract these effects.

How space travel can affect your brain

Finally, last but not least, there’s the impact of space travel on your brain. Interestingly, a team of international experts, including some from Russia, detected crucial changes in the brains of several cosmonauts after a long period in space. It turns out the brain adapts to microgravity by switching off the balance system in the ears, and putting more emphasis in visual and tactile feedback. You’ll know your brain has completed this switch when the feeling of sickness and vertigo finally goes away. This may seem harmless, but this kind of information is vital to develop ways to help people feel less sick in space and adapt faster to low gravity.

More worryingly is the risk of developing dementia or memory loss. Imagine if you go to Mars but can’t remember anything about your journey. Studies with mice found negative effects on the brain even 6 months after exposure to space conditions. There is some hope, however, in the form of pharmaceutical products aimed at protecting neurons. Researchers are not there yet, but work is underway.

Not ready yet, but working on it

The reality is that nobody is going to send you to Mars without knowing in detail how spaceflight can affect your body. However, such is the appeal of the Red Planet that the race is on to develop new ways to ensure a safe journey.

Nick Fuentes joins Alex Jones & Owen to talk about the battle brewing between Republicans and conservatives over American values.