CNN is trying to spin a survey showing record disapproval of Congress. The CNN/ORC International poll released today indicates two-third of respondents believe the current Congress is the worst in their lifetime. 73%, according to CNN, say Congress “has so far done nothing to address the country’s problems, with one in four disagreeing.”

CNN breaks the poll down along establishment political lines. “Negative attitudes extend to both sides of the aisle: 52% believe that the policies of the Democratic leaders in Congress would move the country in the wrong direction; 54% say the same about the policies of congressional Republicans,” CNN Polling Director Keating Holland said.

54% disagree with the policies of the Obama administration.

In order for the nation to move forward, CNN reports, Congress must agree on legislation and pass more laws.

“Even though it did pass a budget agreement, fewer than 60 bills have been signed into law during the first year of the two-year long 113th Congress, according to CNN analysis and by other news organizations as well. Assuming lawmakers don’t pick up the pace next year, and that’s a safe bet as 2014 is an election year, this will become the least productive Congress in at least the last four decades,” explains the CNN Political Unit. 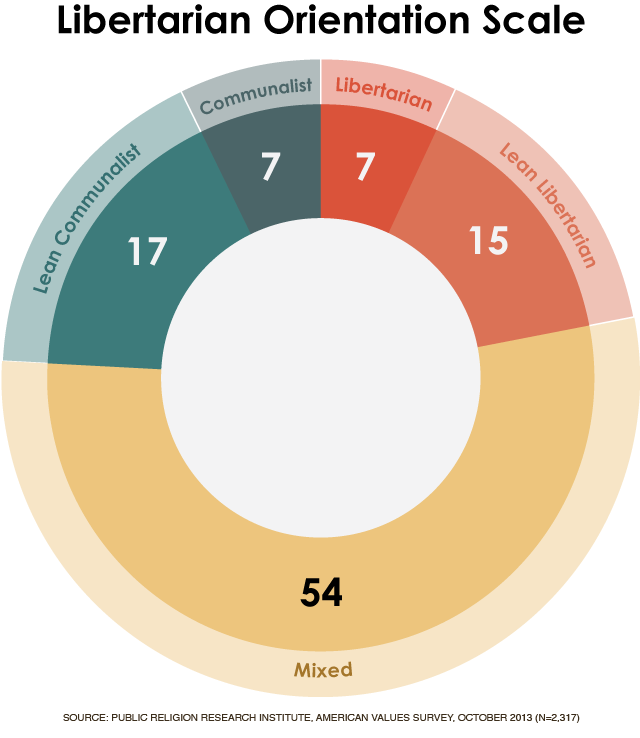 Earlier polls demonstrate overwhelming dissatisfaction with Congress is nothing new. In July, an NBC News/Wall Street Journal poll indicated “83 percent of Americans disapprove of Congress’ job, which is an all-time high in the survey. What’s more, President Barack Obama has seen his job-approval rating dip to its lowest level since August 2011,” according to NBC News.

Increasingly, Americans are looking beyond the establishment branded two party political system. A poll conducted in October by the Public Religion Research Institute shows nearly one-quarter of Americans qualify as libertarians or lean toward a libertarian political philosophy, according to the Washington Post. Most libertarians, the survey revealed, do not consider themselves as members of the tea party.

The poll is tempered by numbers in the other direction. The Washington Post posted an infographic alongside the article showing strong support for communalist political philosophies.

Communalism, or communism lite, is regarded as the political opposite of libertarianism.