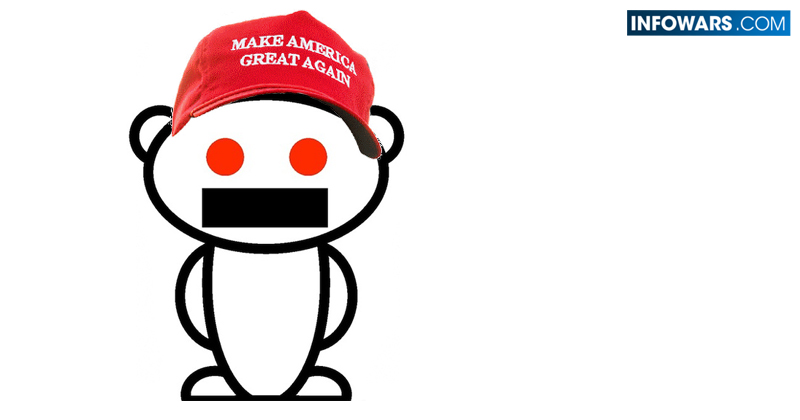 Reddit is banning the vast majority of pro-Donald Trump posts from appearing on its “most popular” page frequented by new users.

The online discussion site announced it was clamping down on what would appear as “popular” by showing visitors only popular posts from handpicked categories, which would apparently exclude anything from pro-Trump subreddits.

In fact, a graph reveals that Reddit administrators are actively filtering out posts from The_Donald subreddit from appearing in /r/popular; if the filter represented just an algorithm based on what users filtered out themselves, one would expect more posts filtered from r/politics.

Instead, there’s a clear bias against anything pro-Trump, and there’s precedent to believe this is intentional censorship.

“Posts stickied on r/the_donald will no longer appear in r/all – r/all is not our frontpage, but is a popular listing that our most engaged users frequent, including myself,” he wrote. “The sticky feature was designed for moderators to make announcements or highlight specific posts.”

“It was not meant to circumvent organic voting, which r/the_donald does to slingshot posts into r/all, often in a manner that is antagonistic to the rest of the community.”

But Huffman’s justification is overshadowed by the scandal in which he was caught editing comments by pro-Trump users critical of him on Reddit.

He isn’t alone.  Since Trump’s election, the largest social media sites including Facebook and Twitter have suppressed Trump supporters – and perhaps even the president himself.

Twitter in particular is apparently censoring positive responses to Trump’s tweets while showcasing the negative ones.

On Feb. 7, Twitter announced it was “collapsing potentially abusive or low-quality Tweets” in the interest of “safety,” a catch-all term which gives the social media giant carte blanche to suppress anything it deems “offensive.”

Trump supporters noticed this caused negative responses to Trump’s tweets to rise to the top of the page, allowing anti-Trump fanatics to dominate the discussion.

Facebook has also long attempted to control discussions on its site by blocking links to alternative media and banning those critical of its censorship practices.


“According to the New York Times, three current and former anonymous employees claim the company has had a new tool developed specifically to restrict certain kinds of posts from appearing in users’ news feeds in certain geographic areas,” reported the Anti-Media. “This form of censorship has been deployed under the auspices of facilitating Facebook’s entry into the Chinese market.”

“Previously, the company did this in Pakistan, Russia, and Turkey, where the respective governments requested the ability for third parties to review and block posted content. Facebook granted the requests and removed approximately 55,000 total pieces of content.”

He also met with with Lu Wei, the czar of China’s draconian Internet censorship system, in 2014, where the Facebook CEO lauded Wei as a visionary.

Since rising to prominence in 2011, Wei has personally overseen the reduction of Internet access in China to cover-up mass government corruption and criticism of communism in general.

This censorship has kept the Chinese population ignorant and easier to control by the ruling elite.

For example, Chinese citizens are among the least aware of the 1989 Tiananmen Square Massacre which took place in the heart of Beijing because government censors routinely clamp down on any mention of the incident.

Facebook is likewise motivated to restrict speech as part of the tech elite’s agenda to eradicate nation-states in favor of a globalist superstate controlled by an unelected network of titans in technology, media, government and academia.

The social media giants – from Facebook to Reddit – are establishing themselves as virtual “nations” ran by authoritarian leaders, such as Zuckerberg and Huffman, who control the public opinion of their “citizens” – the users – by suppressing criticism of their agenda.

These social media sites form an anti-competitive system designed to derail rival viewpoints to the globalist model while also dehumanizing individuals by making them feel isolated and inadequate, despite the fact that it’s the individual who triggers the combustive spark that drives the engine of human progression.