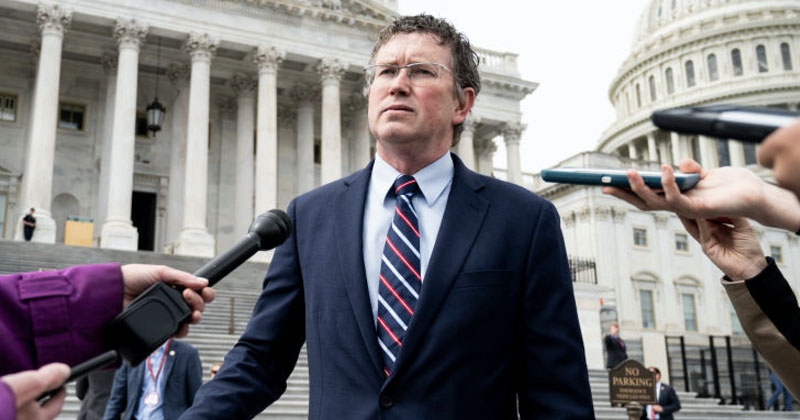 Heroic Kentucky Rep Thomas Massie, one of the only men of character in our entire congress, bravely stood up against the bipartisan $6 trillion screwjob bailout on Friday morning and said the “stimulus should go straight to the people rather than being funneled through banks and corporations.”

President Trump responded by calling for him to be thrown out of the Republican Party.

(1/11)I swore an oath to uphold the constitution, and I take that oath seriously.

In a few moments I will request a vote on the CARES Act which means members of Congress will vote on it by pushing “yes” or “no” or “present.”

(3/11) pilots, grocery clerks, cooks/chefs, delivery drivers, auto mechanics, and janitors (to name just a few). Is it too much to ask that the House do its job, just like the Senate did?

(5/11) This bill should have been voted on much sooner in both the Senate and House and it shouldn’t be stuffed full of Nancy Pelosi’s pork- including $25 million for the Kennedy Center, grants for the National Endowment for the Humanities and Arts, and millions more

(7/11) so that every American, not just the wealthy and privileged, have access to testing. We have shut down the world’s economy without adequate data. Everyone, even those with no symptoms, needs immediate access to a test.

(9/11) If getting us into $6 trillion more debt doesn’t matter, then why are we not getting $350 trillion more in debt so that we can give a check of $1 million to every person in the country?

…& costly. Workers & small businesses need money now in order to survive. Virus wasn’t their fault. It is “HELL” dealing with the Dems, had to give up some stupid things in order to get the “big picture” done. 90% GREAT! WIN BACK HOUSE, but throw Massie out of Republican Party!


Trump flat out lied and claimed Massie is aiding the Democrats’ war on the Second Amendment even though he has been a stalwart defender of the right to bear arms his entire time in congress.

By empowering the Radical Left Democrats, do nothing Kentucky politician @RepThomasMassie is making their War on the 2nd Amendment more and more difficult to win (But don’t worry, we will win anyway!). He is a disaster for America, and for the Great State of Kentucky!


Trump, on the other hand, ran on protecting the Second Amendment but once he got elected he ordered bump stocks to be banned by fiat decree, came out in support of red flag gun laws and said the government should “take the guns first” and “go through due process second.”

Pres. Trump to VP Pence on gun violence restraining orders: “I like taking the guns early… so we could do exactly what you’re saying, but take the guns first, go through due process second.” https://t.co/Um6f2f6yVZ pic.twitter.com/iKJlmnwSlu


Trump went on to praise John Kerry and hail his “good sense of humor” because he called Massie “an asshole.”


Thomas Massie is the closest man we’ve got to a Founding Father in our congress.

He’s a man of incredible character and brilliance who married his high school sweetheart, built his own home out of trees he cut down on his own property and raised a beautiful family on his own farm.

Trump, on the other hand, allowed himself to be swallowed by the swamp and pushed a basic b*tch GOP agenda of tax cuts for billionaires and now trillion dollar banker bailouts for Wall Street with some chump change thrown in to buy our acquiescence.


Don’t piss on our legs and tell us it’s raining, Mr President.

As Massie said, this $2 trillion bill could have given $13,333 to 150 million working Americans or around $6060 to every single American rather than $1,200 per person and around $1.5 trillion to banks and special interests (on top of $4 trillion just for Wall Street).

That’s a much better stimulus which would have gotten massive support from the American people rather than this screwjob which will give trillions to bankers and Wall Street speculators like Bill Ackman who should be bankrupt and in prison.

We’re witnessing the largest wealth transfer from the middle class to the parasitic ruling class in history and only one congressman has the temerity to stand against it!

It’s pretty clear now, with enough members here to pass the bill, that Pelosi and McCarthy are still working together to block a recorded vote just to insulate members of Congress from ACCOUNTABILITY.

Biggest spending bill in the history of mankind, and no recorded vote? #SWAMP

Are they afraid of the truth? I’ve been told that they don’t even have 1 minute available for me to speak against this bill during the 4 hour debate. The fix is in. If this bill is so great for America, why not allow a vote on it? Why not have a real debate? #SWAMP

.@RepThomasMassie is one of the most principled men in Congress & loves his country. He is defending the Constitution today by requiring a quorum. There’s nothing 3rd rate about that, @realDonaldTrump. I may miss vote if he forces roll call (flights) but it will pass. Back off. https://t.co/ms8TM3rJp8

And there you have it.

Our government enabled a pandemic, did nothing to fix the problem, and then sold the public out to corporations and their cronies with no accountability as a final kick to the teeth.

And now the orange harlot will sign it and proclaim victory.

.@RepThomasMassie: “There’s a big cover up in there.”