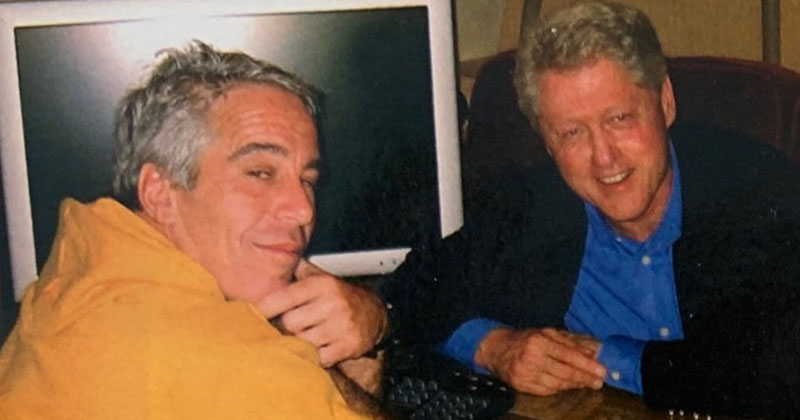 The former president was Epstein’s closest “celebrity mate” who visited Epstein’s 10,000-acre compound in the New Mexico desert, said Jared Kellogg, a former IT system contractor for the property.

Kellogg, who had little knowledge of Epstein’s pedophiliac reputation, said he was brought on by property manager Brice Gordon to improve the estate’s security systems and set up surveillance cameras around the compound.

“My contact was Brice, their main concern was that there was no video surveillance on the property at all. I thought this was a simple request, as they wanted surveillance to protect their investment. It’s a huge site,” Kellogg told the Daily Mail.

“But what was weird was that the whole time I was on site, Brice would be bragging about how the Clintons would visit, the whole family. Not just Bill, but Bill, his wife, their kid, and they would stay on the ranch itself.”

Kellogg went on to describe the elaborate layout of Epstein’s ranch, and how it was meant to capture a Wild West motif for guests like the Clintons.

“It was like Westworld, it’s like they built a functioning movie set, they put a lot of thought and detail into it, the flooring and facilities in there.”

“I was saying how cool the replica houses were, they’re pretty neat like the 1800s,” Kellogg continued. “[Gordon] said: ‘Yeah, they’re built for guests, we get a lot of visitors. It’s really cool the Clintons come out and hang out [with Epstein].”

“It sounded like a normal summer vacation,” he added, unaware Epstein frequently trafficked underage girls through his property.

Bill Clinton had denied ever visiting any of Epstein’s homes save for a visit at his New York apartment, where a $56 million portrait of the former president in a Monica Lewinsky-like blue dress and red heels had been discovered hanging on Epstein’s wall during an FBI raid after his arrest in July.

“[Bill Clinton] had one meeting with Epstein in his Harlem office in 2002, and around the same time made one brief visit to Epstein’s New York apartment with a staff member and his security detail,” said Clinton’s official statement after Epstein’s arrest.

“He’s not spoken to Epstein in well over a decade, and has never been to Little St. James Island, Epstein’s ranch in New Mexico, or his residence in Florida.”

If Kellogg’s testimony is true, it means Clinton lied once again about his association with Epstein, this time about his visits to Zorro Ranch, where Epstein schemed to create a eugenics program where he would systematically impregnate dozens of women to “seed” the human race.