But who exactly is Monica McLean?

In addition to being Ford’s best friend, McLean was also a 24-year employee of the Department of Justice and FBI from 1992 to 2016, according to her LinkedIn profile.

The ex-boyfriend described Ford’s relationship with McLean in a letter obtained by Fox News, detailing how she helped McLean pass a polygraph for an FBI position.

“During some of the time we were dating, Dr. Ford lived with Monica McLean, who I understood to be her life-long best friend. During that time, it was my understanding that McLean was preparing was interviewing for jobs with the FBI and the US Attorney’s Office,” he wrote.

“I witnessed Dr Ford help McLean prepare for a potential polygraph exam. Dr. Ford explained in detail what to expect, how polygraphs worked and helped McLean become familiar and less nervous about the exam. Dr. Ford was able to help because of her background in psychology.” 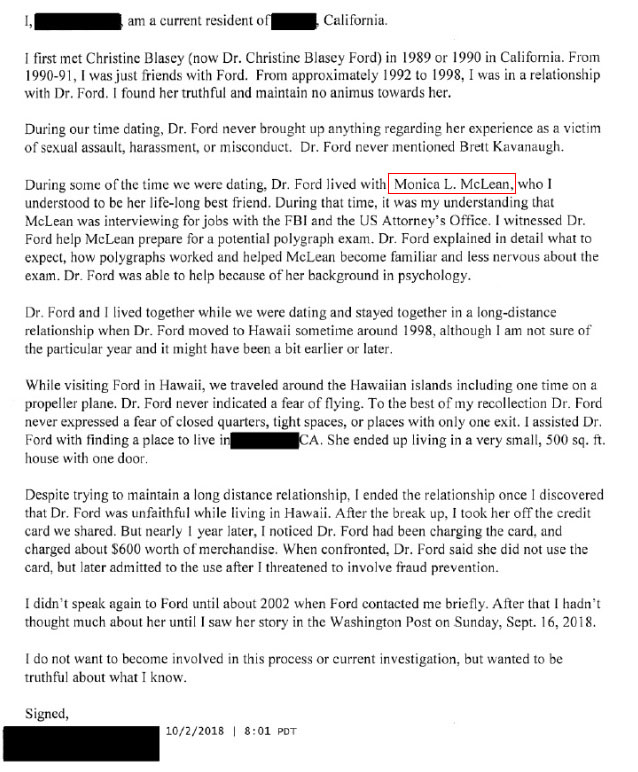 A 2000 Los Angeles FBI declaration further confirms McLean’s position with the FBI, which she listed as a Special Agent of the FBI, Associate Division Counsel, in the Los Angeles Division Legal Unit.

Currently, according to her historical address records, McLean lives in Rehoboth, Delaware. 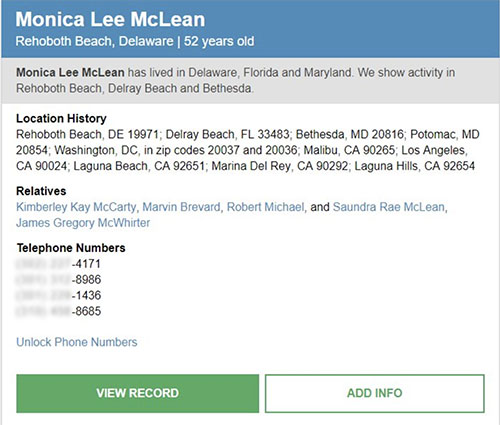 This is an interesting fact, given Ford testified to Congress last week that she drafted her letter to Sen. Dianne Feinstein (D-Calif.) from the same town of Rehoboth, Delaware.

Rachel Mitchell: “Did you ever give Senator Feinstein or anyone else the permission to release that letter?”

MITCHELL: The second is the letter that you wrote to Senator Feinstein, dated the — July 30th of this year.

MITCHELL: Did you write the letter yourself?

MITCHELL: And I — since it’s dated July 30th, did you write it on that date?

FORD: I believe so. I — it sounds right. I was in Rehoboth, Delaware, at the time. I could look into my calendar and try to figure that out. It seemed…

MITCHELL: Was it written on or about that date?

FORD: Yes, yes. I traveled, I think, the 26th of July to Rehoboth, Delaware. So that makes sense, because I wrote it from there.

MITCHELL: Is the letter accurate? FORD: I’ll take a minute to read it.

Is it a coincidence the same Ms. McLean, who Ford allegedly coached on lie detector testing, was in the same town days leading up to the actual writing of the letter?

It could help explain a few things: first, it positions Ford to navigate the preparatory processes needed to level her allegations against Kavanaugh.

Second, with a former FBI agent close to Ford, it could explain why the Democrats were so eager to launch a new FBI investigation into Kavanaugh.