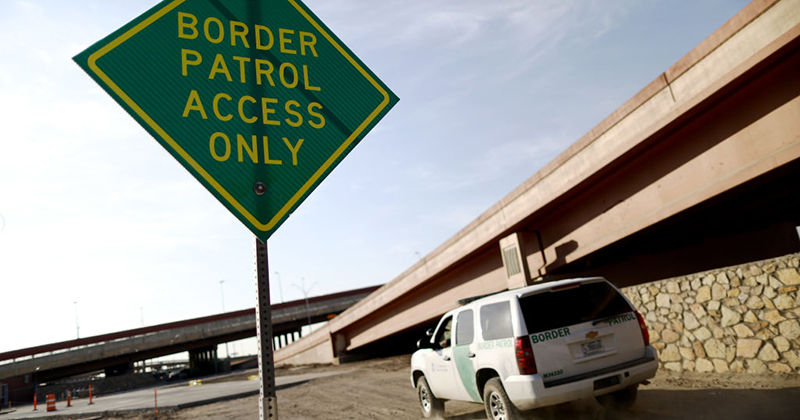 The situation provides easy access for drug smugglers who pass through John Ladd’s Arizona cattle ranch with massive satchels of marijuana, though instead of simply driving across they must now crawl through the mud.

You really can’t make this stuff up… https://t.co/WDQAUsZE0W

“The border is so diverse,” Roy Villareal, Tucson sector chief for the U.S. Border Patrol, told The Washington Post. “You have to plan for water flow … People think it’s just this monolithic wall, sort of like the Great Wall of China, where you drop it into place and that’s all there is to it. And that’s not the reality at all.”

Some sections of the border near Ladd’s ranch and others experience heavy thunderstorms and flooding that carry debris south across the border, and the wall isn’t designed to withstand the pressure from the rocks, tree limbs, brush and other stuff that gets caught in the metal bollard structure, which effectively acts as a storm grate.

So the government plans to install hundreds of flood gates along the bottom of the wall to allow the debris through, and because they are in remote locations without electricity, Border Patrol agents will open the gates at the start of summer and leave them open for months, according to Business Insider.

Without the gates, the flooding could topple the wall, and the recent construction along the border makes that possibility more likely, Lee Baiza, former superintendent of the Organ Pipe Cactus National Monument told the Times.

“It’s a fragile environment, so if you go drive across that country you will loosen up the soil and brush,” Baiza said. “The more activity, the more it gets run over, the more debris you create.”

Ladd told the Post that Border Patrol installed an 18-foot bollard wall on his property in 2008 and it now includes about 70 “lift gates” agents use a forklift to open at the start of summer. Initially, smugglers drove through the openings with truckloads of marijuana, but Border Patrol eventually caught on and lowered the openings to 4-feet, Ladd said.

There’s no longer vehicles coming through, he said, but the illegal crossings continue.

“They know as soon as the Border Patrol opens them,” Ladd told the Post.

Regardless, U.S. border officials told the Post new sections of border wall will likely require hundreds of flood gates that will follow the same protocol, though they contend a wall with giant holes in it is better than no wall at all. Officials told KOLD in 2017 that the gates are typically open in July and August.

“At the end of the day, you still need an individual to monitor and make that arrest,” Villareal told the Post. “What’s been tested, and seems to work well for us, is opening them up at the beginning of the monsoon season, and at the end of monsoon season, closing them back down.

“Which means for the patrol agent in charge of that particular area, he or she has to deploy manpower to cover that area when the gates are open,” he said.

U.S. Customs and Border Protection officials did not respond to the Post’s questions about how many and where, exactly, the new gates will go in.

White House officials are hoping to complete nearly 900 miles of new barriers by 2022, including plans for new barriers through mountainous areas with plenty of canyons and creek beds, according to the news site.