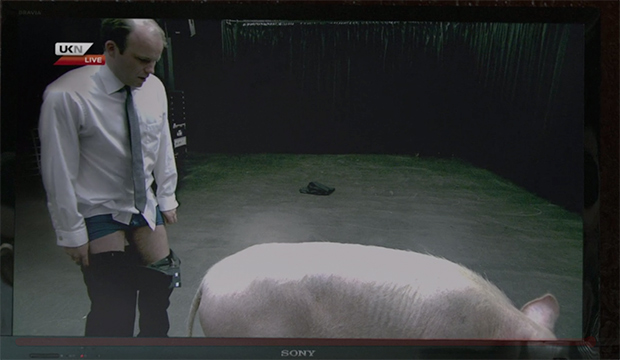 British Prime Minister David Cameron performed depraved sex acts with a dead pig as part of a college initiation ritual, according to a book written by one of his Oxford peers.

The bizarre ritual was part of an induction ceremony into the Piers Gaveston Society, an ultra-exclusive University of Oxford dining club known for its decadent sex and drug-fueled parties.

The current UK prime minister’s history of debauchery is outlined in the book, “Call Me Dave: The Unauthorised Biography,” penned by entrepreneur and fellow Oxford colleague Lord Michael Ashcroft.

Writing for The Daily Mail, Lord Ashcroft and the co-author of his book, Isabel Oakeshott, profess:

A distinguished Oxford contemporary claims Cameron once took part in an outrageous initiation ceremony at a Piers Gaveston event, involving a dead pig. His extraordinary suggestion is that the future PM inserted a private part of his anatomy into the animal’s mouth.

The source — himself an MP — first made the allegation out of the blue at a business dinner in June 2014. Lowering his voice, he claimed to have seen photographic evidence of this disgusting ritual.

Ashcroft says the claim was later repeated by the same MP, and then mentioned a third time, where he disclosed further details including the size of the photo showing the alleged “porking” and the name of the person who may possess it.

“The pig’s head, he claimed, had been resting on the lap of a Piers Gaveston society member while Cameron performed the act,” Ashcroft writes.

The unnamed MP also told Ashcroft he’d considered joining the club, but for the contents of one gathering which left him “walking out in disgust.”

“What it basically involved was getting drunk and standing on restaurant tables, shouting about “f***ing plebs”,’ the MP said, according to Ashcroft. “It was all about despising poor people.”

Cameron was also profusely fond of smoking marijuana in his college days and may have also dabbled in cocaine depending on who you ask, Ashcroft claims, acts at odds with the sudden anti-drug stance the Conservative party leader embraced once he became prime minister.

While Cameron had once considered decriminalization of cannabis and lesser punishments for ecstacy users, and even the implementation of “safe injection rooms” for heroin addicts, his view on drugs sharply changed once he was elected to higher office.

“I don’t believe in decriminalizing drugs that are illegal today,” Cameron stated last year, addressing the findings of a report which recommended relaxing drug laws. “I’m a parent with three children; I don’t want to send out a message that somehow taking these drugs is OK or safe.”

Ashcroft says he moved to publish the revelations after Cameron reneged on a promised cabinet position after being elected prime minister.

A similar, but fictitious sexual incident involving a UK prime minister and a pig was portrayed in the 2011 British TV series Black Mirror. In the first episode, entitled The National Anthem, a member of the royal family is kidnapped and held for ransom unless the prime minister agrees to have sex with a pig live on national television.

A prankster has also created a Twitter account under the handle “Cameron’s Pig” and has been setting the internet ablaze with viral tweets since news of the controversy broke yesterday.

.@David_Cameron it was a one time thing. Stop texting me.

The whole episode left me with a bad taste in my mouth.

It was a long night… pic.twitter.com/PEOkcJwg1o

Ugh. Just got my ex on Tinder… pic.twitter.com/e7Qedu3Y3H