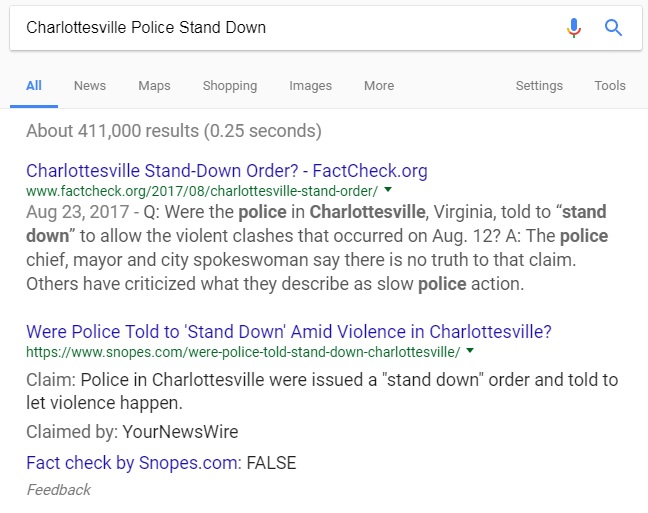 According to a bombshell new 220-page report, Charlottesville police chief Al Thomas ordered police to stand down at the “Unite the Right” rally in August because he said it would “make it easier to declare an unlawful assembly.”

From VICE:
“Let them fight.” That directive from the police chief as the violence started to unfold was only part of the massive failure of the response to the “Unite the Right rally” in Charlottesville, according to a searing 220-page report by an independent review team released Friday.

[…]Virginia State Police were told that their job was to protect Emancipation Park, where the statue of Robert E. Lee was located. Charlottesville officers were told that they were only to “intervene in serious violence, violence where someone would be seriously hurt or killed,” Heaphy said.

When things began to escalate, with white supremacist groups openly clashing with antifa and other counterprotesters, Charlottesville police leadership responded sluggishly, according to the report.

Upon witnessing the first signs of open violence, Police Chief Al Thomas said “Let them fight, it will make it easier to declare an unlawful assembly’,” according to his personal assistant’s account to investigators. Thomas didn’t recall making that statement but did concede he wanted to wait to see how things played out. “Regardless of what he said, Chief Thomas’ slow-footed response to violence put the safety of all at risk and created indelible images of this chaotic event,” the report states.

It wasn’t until more than 40 minutes after those first signs of violence that an unlawful assembly was declared, at around 11 a.m. Other delays were due in part to the fact that officers didn’t have their riot gear on hand, which they would need to disperse protesters from the park. “When the CPD officers arrived at the supply trailer, they had to fish through plastic bins to find their gear, which included gas masks, riot shields, and ballistic helmets,” the report stated. “For many of them, it was the first time they had ever worn this equipment.” The line commanders were also unable to locate all their bullhorns, which they needed to clear the area. Other hold-ups included poor communication with Virginia State Police, who were trying to extract their undercover agents from the fray in the park before Charlottesville riot police moved in.
If you search “Charlottesville police stand down” on Google as of today, the top two results are “fact checkers” proclaiming there was no stand down because the police chief said so and any claim to the contrary is “false.”

It turns out there was a stand down as your’s truly reported right after the event and it was done specifically to “make it easier to declare an unlawful assembly.”

As the Daily Caller reports:
According to the report, review of the “open source video footage” of the parking garage confrontation shows that “a counter-protester attempted to yank a flag away from a Unite The Right demonstrator who resisted and fought back… During that struggle, a second counter-protester named Deandre Harris rushed in and used a club—possibly a Maglite flashlight—to strike the Alt-Right demonstrator’s head or shoulder.”

The report notes that Harris was then pushed to the ground when the group of white nationalists began to fight back, “which left him defenseless against a mob of angry Alt-Right demonstrators that descended upon him with flagsticks, shields, and pieces of wood.”
Deandre Harris raised $166,000 on GoFundMe after claiming he was “beaten by white supremacists” for no reason.

• Black man hits man with a bat
• Gets beat up
• Plays victim & gets $166k
• Now has warrant issued for arrest
• This is how left reacts… pic.twitter.com/mhhcX1j9au

You can see Harris attacking a man with an alleged Maglite flashlight — which he was carrying in broad daylight — in the video below:

After raising heaps of cash off gullible liberals, Harris released a music video on YouTube featuring himself driving a new Mercedes Benz and flaunting piles of cash.

Harris was served a warrant for alleged unlawful wounding and turned himself in October 12th only to be immediately released on an unsecured bond.