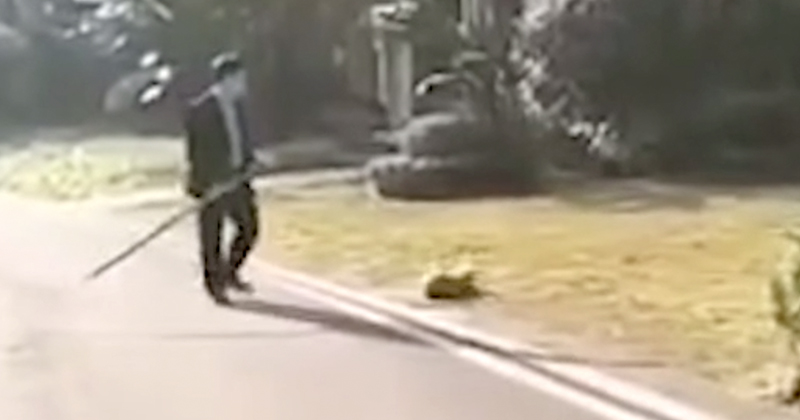 Animal activists in China are reporting a group of Chinese “community officers” are beating stray dogs to death with sticks to prevent them from spreading coronavirus.

Nanchong Stray Animal Rescue provided video to MailOnline allegedly showing an officer striking a canine with a large wooden staff and another worker removing the body of another dog.

The footage is said to have been filmed at a residential complex in the city of Nanchong in Sichuan Province, China.


The animal rescue group sent MailOnline a full video of the attack, but the outlet decided to edit the more violent sections out “due to its graphic nature.”

Officers allegedly told community residents, “As long as [we] see a dog in the complex, no matter if it is on the leash or not, we will beat it to death.”

Nanchong Stray Animal Rescue released a statement following the release of the video:

At the crucial point of fighting the epidemic, the management office and community officers should have disinfected the neighbourhood, recorded information of visitors, supervised suspected patients under quarantine, or even given care to the psychological stress and trauma residents got from the epidemic. But instead, [they] ignored citizens’s love and appeal for animals and killed lives at will without giving notice or seeking permission.

However, Nanhu Committee officials claimed the workers were culling a stray dog who had bitten someone.

A Humane Society International (HSI) spokesperson said, “The advice by the World Health Organisation that there is no evidence dogs and cats can be infected with the virus, needs to be heard throughout China.”

As of Tuesday, COVID-19 has resulted in at least 1,018 deaths and more than 43,130 people infected in 28 countries and territories around the world.