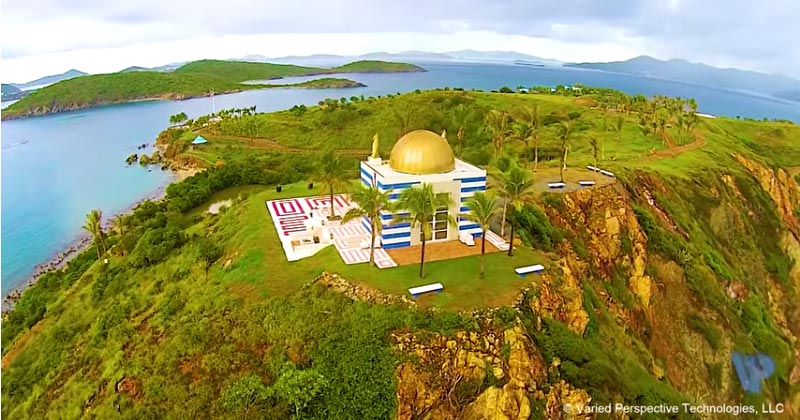 Ghislaine’s friend told Vanity Fair she “thought that [Ghislaine] and Epstein were videotaping everyone on the island as an insurance policy, as blackmail.”

"Maxwell also said the island had been completely wired for video; the friend thought that she and Epstein were videotaping everyone on the island as an insurance policy, as blackmail." https://t.co/6R7bIHrROb

The nature of the relationship between [Jeffrey] Epstein and [Ghislaine] Maxwell, the favorite daughter of embezzling press baron Robert Maxwell, who died when he fell or was pushed from his yacht, the Lady Ghislaine, is not well known. Multiple victims claim she was both part of the sex trafficking ring, often bringing girls to Epstein, and a sexual participant. But Epstein told of-age women he courted that Maxwell was a former girlfriend fallen on hard times, and that he had taken it upon himself to maintain her position in society. “Ghislaine floated in and out of the house with the keys, and even though Jeffrey told me they didn’t have a sexual relationship, she’d drop under her breath that she was sleeping in his bed from time to time,” says an ex-girlfriend. Another woman in Maxwell’s orbit says she used to joke about keeping herself rail thin because Epstein liked thin girls. Maxwell, whose father was Jewish, liked to shock. “She said, ‘I do it the way Nazis did it with the Jews, the Auschwitz diet. I just don’t eat.'”

[…] On the weekends in the 1990s, Maxwell would have her Rollerblades FedExed to Epstein’s island in the Caribbean, and said she got her helicopter’s license so she could transport anyone she liked without pilots knowing who they were. Maxwell also said the island had been completely wired for video; the friend thought that she and Epstein were videotaping everyone on the island as an insurance policy, as blackmail. A source close to Maxwell says she spoke glibly and confidently about getting girls to sexually service Epstein, saying this was simply what he wanted, and describing the way she’d drive around to spas and trailer parks in Florida to recruit them. She would claim she had a phone job for them, “and you’ll make lots of money, meet everyone, and I’ll change your life.” The source continues, “Ghislaine was in love with Jeffrey the way she was in love with her father. She always thought if she just did one more thing for him, to please him, he would marry her.”

Maxwell had one other thing to tell this woman: “When I asked what she thought of the underage girls, she looked at me and said, ‘they’re nothing, these girls. They are trash.'”

Alex Jones breaks down some of the details of Jeffrey Epstein’s life he tried to keep hidden from the public.

Gordon Thomas and Martin Dillon state in their 2002 book, “Robert Maxwell: Israel’s Superspy,” that evidence shows the Mossad ordered Robert Maxwell’s assassination after he piled up mountains of debt and outlived his usefulness.

On Monday, The Telegraph reported Ghislaine Maxwell told friends that with Epstein’s case resurfacing she planned to “totally disappear.”

The Washington Post reported Monday that she appears to have gone “missing” and “is believed to be living abroad.”

“According to people familiar with the investigation, authorities have had trouble locating Maxwell, who is believed to be living abroad.” https://t.co/N8f2NDruIq

Had our government actually wanted to solve this case they would have locked her up weeks ago rather than give her ample warning and plenty of time to flee.