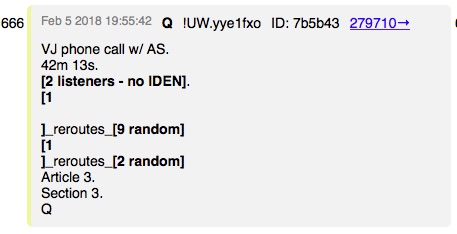 WASHINGTON, D.C. – As he struggles to preserve the flailing “Russian Collusion” narrative against President Trump, Rep. Adam Schiff, the ranking member of the House Intelligence Committee appears to be rapidly developing serious legal problems of his own.

On Monday, Feb. 5, QAnon posted at timestamp 19:55:43, approximately 7:56 pm ET, that a recorded phone call exists between Adam Schiff and Valerie Jarret, lasting 42 minutes and 13 seconds, that constitute evidence of treason under Article 3, Section 3 of the Constitution. 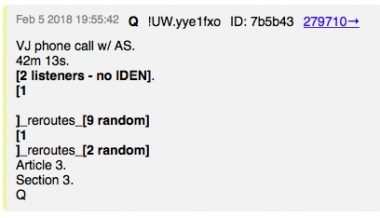 QAnon documents that the recorded phone call was witnessed by what appear to be 11 people, supposedly fulfilling the requirement of Article 3, Section 3 that two witnesses are available to give testimony to the same overt act that constitutes treason against the United States.

Infowars.com notes that there is no published evidence that would validate QAnon’s allegation that Schiff and Jarrett were involved in a treasonous phone call.

Still, this shocking revelation, if true, should give Schiff pause to take seriously President Trump’s tweet on the same day, putting Schiff on notice that criminal charges could be brought against Schiff for leaving committee hearings to illegally leak confidential information.

Little Adam Schiff, who is desperate to run for higher office, is one of the biggest liars and leakers in Washington, right up there with Comey, Warner, Brennan and Clapper! Adam leaves closed committee hearings to illegally leak confidential information. Must be stopped!

As seen here, Trump’s tweet suggested that “Little Adam Schiff” is so desperate to run for higher office that he has become “one of the biggest liars and leakers in Washington,” on a par with former FBI Director James Comey; Sen. Mark Warner, the ranking member of the Senate Select Committee on Intelligence; former CIA Director John Brennan; and former Director of National Intelligence James Clapper.

Beginning at the end of January, QAnon has issued a series of posts drawing attention to Schiff’s alleged involvement with various scandals, including some that may be criminal in nature, that are reported to be ongoing in his California district that includes West Hollywood.

Adam Schiff and the Standard Hotel 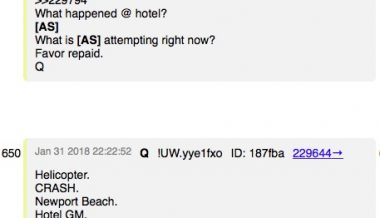 The background to these posts takes us to the day before, when an R44 helicopter taking off from John Wayne Airport in Orange County, California, at 1:45 pm local time, crashed in Newport Beach residential area, killing three executives associated with the Standard Hotel, a trendy, gay-friendly hotel located in Schiff’s district in West Hollywood, California.

Tena was a Spanish-born entrepreneur, involved with Ferrado Garden Court LLC, a company in Spain owned by two of the richest people in Spain, with international holdings that evidently include stock in the Standard Hotel chain in the United States.

The helicopter, when it crashed, was headed for a day-trip to Catalina Island, one of the Channel Islands offshore, southwest of Los Angeles.

In 1984, West Hollywood was incorporated as “America’s first gay city,” capping off a legacy that traces back to the Prohibition Era “when the 1.7-mile-long stretch of the Sunset Strip became a haven for speakeasies and casinos because it fell outside the jurisdiction of the hyper-vigilant LAPD and inside the jurisdiction of the relatively lax L.A. County Sheriff’s Department.”

According to a New York Times report published Nov. 9, 2017, André Balazs, known as the creator of the Standard brand of hotels that he created two decades ago, was also known for dating actress Uma Thurman for years, as well as dating television host Chelsea Handler, and for making his hotels a hangout “for members of the hip Hollywood set, like Johnny Depp and the singer Florence Welch.”

The New York Times reported Balazs has been accused of sexual harassment, specifically running his hand up the dresses of various women, touching their genitals without consent, in a pattern of behaviors that traces back to an incident first reported in 1991.

In the next post, QAnon suggested at timestamp 22:46:51, approximately 10:47 pm ET, that Schiff was being blackmailed over “a death cover-up” that occurred at the Standard Hotel. 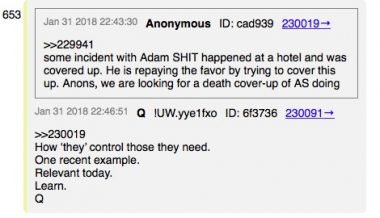 Then, in a final post, QAnon suggested at timestamp 23:00:51, approximately 11:01 pm ET, that Schiff was concerned he might be implicated in a pedophilia ring that an anonymous poster suggested was being run out of the hotel. 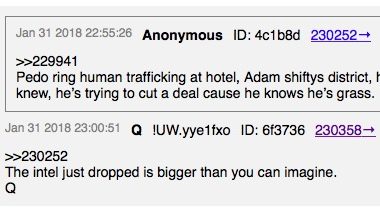 Infowars.com stresses that there is no published evidence that would support QAnon’s implied allegations that Schiff was involved with improprieties that may or may not have happened at the Standard Hotel in West Hollywood.

In an earlier post, QAnon on Dec. 10, 2017, suggested at timestamp 23:29:56, approximately 11:30 pm ET, that Schiff was “a traitor to our country,” a “leaker” of national security information.  In this post, QAnon called Schiff “evil,” taunting Schiff that QAnon hoped the “$7.8 million dollars was worth it.” 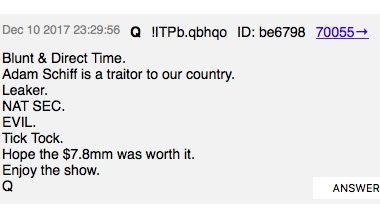 This QAnon post appears to reference a report published two days earlier, on Dec. 8, 2017, that the Orange County District Attorney’s office had obtained a $7.8 million settlement in a civil lawsuit against two Yorba Linda medical communities accused of profiting illegally from the sale of fetal tissue and stem cells.

Again, Infowars.com has no proof this QAnon allegation can be substantiated.