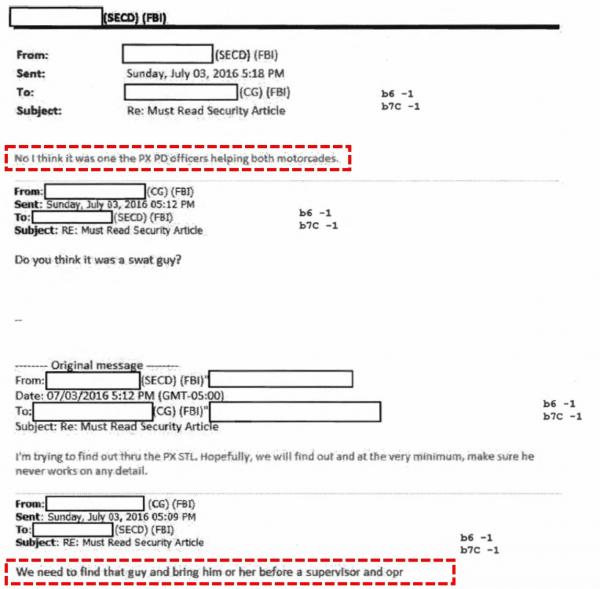 Newly released emails reveal that the FBI focused on tracking down the whistleblower who exposed Bill Clinton’s tarmac meeting with Loretta Lynch rather than look into the questionable meeting itself.

The FBI emails, obtained by watchdog group Judicial Watch through FOIA requests, reveal the extent of the agency’s concern with the whistleblower who alerted reporters to the now-infamous tarmac meeting between former President Bill Clinton and Obama’s Attorney General Loretta Lynch.

An email chain sent on July 3, 2016 shows a pair of FBI agents discussing who might be responsible for alerting reporters to the Clinton-Lynch tarmac meeting, saying “we need to find that guy and bring him [in].”

“Do you think it was a SWAT guy?” asked one agent.

The other agent responded he believed it was a Phoenix PD officer working security detail.

“I’m trying to find out thru the PX STL. Hopefully, we will find out and at the very minimum, make sure he never works on any detail,” said the second agent.

A separate email chain goes even further, labeling the leaker as a “security threat.”

The leak appeared to be so serious that a mass email was sent by the FBI’s Security Division to every FBI field office, lambasting agents for “violating the trust” of the Attorney General “in our team.”

“Please read the attached article, regarding the AG’s meeting with Clinton. I believe that the source quoted in this article is one of the local Phoenix LEO’s. Needless to say that I have contacted the Phoenix office and will contact the local who assisted in an attempt to stem any further damage. This is exactly why our Discretion and Judgement are the foundation of the AG’s trust in our team, which is why we can never violate that trust, like the source did for this article.”

In June 2016, Bill Clinton had what he called an “impromptu” meeting with Lynch for 30 minutes on her private plane in Phoenix, calling it a “social meeting” where they talked about their “grandchildren” and “golf.”

However, the timing and circumstances of the meeting were highly suspicious given then-candidate Hillary Clinton was under investigation by the FBI, headed by Lynch’s Justice Department, and former FBI Director James Comey had cleared Hillary Clinton of any alleged crimes relating to her secret server just days later, despite “evidence of potential violations.”

Even then-candidate Donald Trump could see the writing on the wall, saying that “Crooked Hillary ordered Bill to have the meeting” with Lynch.

The SECRET meeting between Bill Clinton and the U.S.A.G. in back of closed plane was heightened with FBI shouting "go away, no pictures."

I believe that Crooked Hillary sent Bill to have the meeting with the U.S.A.G. So Bill is not in trouble with H except that he got caught!

You can view the full Judicial Watch document dump here.