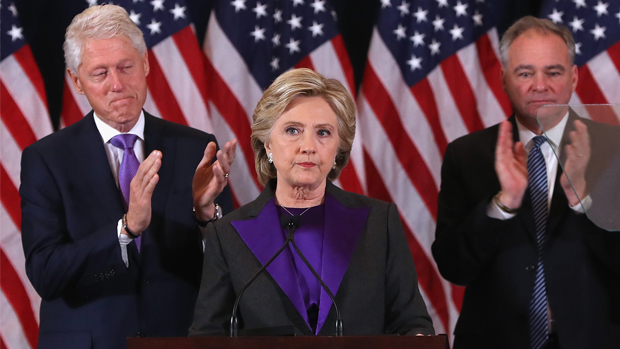 Clinton, who has deep ties to Soros, also wore purple during her concession speech on Nov. 9.

Soros, a socialist billionaire best known for breaking the British pound in 1992, has funded government overthrows, known as color revolutions, in Ukraine, Georgia, Kyrgyzstan and other countries in the former Soviet bloc, the Middle East and North Africa.

And now he’s trying to do the same using far-left radicals in the U.S., if Hillary’s recent penchant for the color purple is any indication.

But why purple? It’s the color resulting from mixing red and blue – and Clinton and others pushing the upcoming “purple revolution” will likely justify it as the “unification” of the divided red and blue states of America.

“Anytime globalist politicians embrace a color, be on guard for a revolution bearing that particular hue,” reported D.C. journalist Wayne Madsen. “On the day after the election that propelled Donald Trump into the White House, Hillary and Bill Clinton entered the ballroom of the ‘Moonie’ Unification Church-owned New Yorker hotel in midtown Manhattan adorned in the color purple.”

Already many of the nationwide protests since the election were coordinated by the Soros-funded activist group MoveOn.org.

“When it comes to themed revolutions, the Sorosites have refined the art to a science,” Madsen added. “While Mrs. Clinton called for uniting the nation in her concession speech, Soros’s minions took the streets in protests, some turning violent, across the United States.”

“Clinton, who received millions of dollars in campaign contributions from Soros, showed her real intentions by signaling the start of Soros’s Purple Revolution in the United States.”