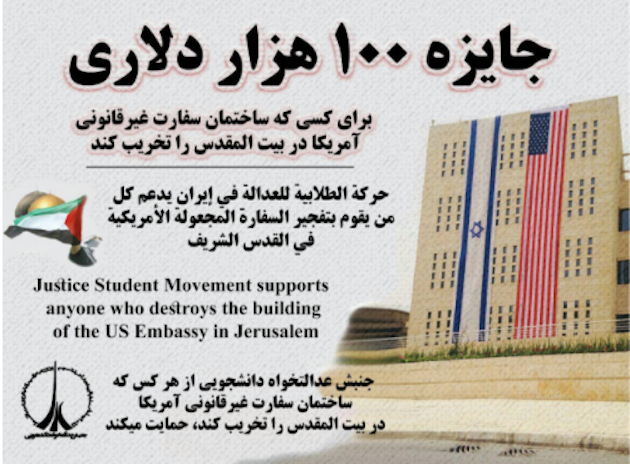 An extremist Iranian group is offering a $100,000 reward to anyone who bombs the newly opened U.S. embassy in Jerusalem, according to reports.

The Iranian Justice Seeker Student Movement group has distributed posters calling for the destruction of the embassy.

“The Student Justice Movement will support anybody who destroy the illegal American embassy in Jerusalem,” the poster states in Farsi, Arabic, and English, which was given to The Free Beacon.

“There will be a “$100,000 dollar prize for the person who destroys the illegal American embassy in Jerusalem,” the poster states.

“Unfortunately, terrorism directed toward diplomats and embassies has become a central pillar of the Islamic Republic’s culture,” Rubin said.

“Terrorism is lionized in Iranian schools. This bounty is more the rule than the exception. To blame Washington or Jerusalem is to blame the victim and give terrorists a veto over U.S. policy.”