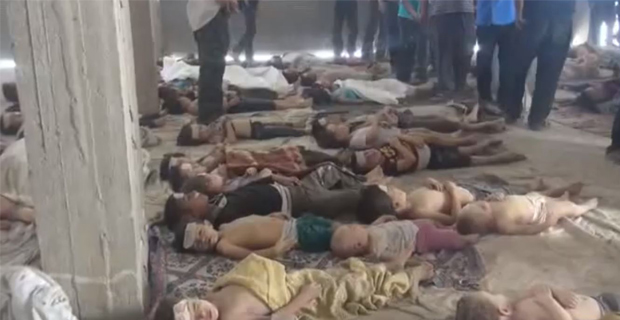 According to eastern Ukrainian sources who contacted WMR, the Ukrainian central government in Kiev has been stockpiling cylinders of toxic gas and canisters of other poisonous substances at an electrical plant in Slavyansk, a town in eastern Ukraine that remains occupied by Kiev troops.

The Donbas region in eastern Ukraine, populated by mostly ethnic Russians and Russian-speakers, declared independence last year as the People’s Republics of Donetsk and Lugansk. The Ukrainian government, aided by neo-Nazi and Israeli mercenaries, as well as “Al Qaeda” and “Islamic State” veterans from Iraq and Syria, have been waging a war against the people of eastern Ukraine with military assistance from the United States and other NATO nations.

A source in Slavyansk reports, “There’s chlorine in cylinders, in not less than five covered wagons and also in other containers with contents I know nothing about, labeled with words and signs “poison, “danger,” and “do not touch without protection.” The source added, “All of it was brought in under the guise of varnishes and paints, but I know the look of the packaging of both, and whatever was brought here last week has got nothing to do with it, it looks like a chemical weapon.”

The report from the Donbas region also stated that the intelligence service of the Donetsk People’s Republic (DPR) was informed by its sources inside the Ukrainian Security Service that Kiev plans to use the chemical weapons in eastern Ukraine and then blame the eastern Ukrainian separatists. The source with DPR intelligence said, “I think they will follow the suit of the militants in Syria, they [Kiev] will use it against their own soldiers and civilians, and blame us, following which they will invite foreign reporters, show the corpses, raising a worldwide scandal with demand that NATO forces bomb us.”

A Ukrainian rail and road transportation industry source confirmed that the suspect canisters spotted in Slavyansk were, in fact, transported as dangerous cargo by the Ukrainian Security Service and Ukrainian military intelligence, with the full cooperation of Kiev and local authorities.

In Syria, Islamic State guerrillas and their allies used sarin and chlorine gas to attack civilians outside of Damascus and then blamed the Syrian government of Bashar al Assad for waging chemical warfare against his own people. The charge that certain governments have resorted to using chemical weapons, known as the “poor man’s weapon of mass destruction,” has been a favorite neocon propaganda tool employed against targeted leaders, including Assad, Libya’s late leader Muammar Qaddafi, Sudanese President Omar al-Bashir, and, possibly soon, the leadership of eastern Ukraine. In all these cases, the story of chemical weapons use was either totally false or was altered to show it was the governments that used the weapons and not U.S.-supported rebels.

Assad was accused of using sarin gas on to kill some 1300 civilians near Damascus, including children (above). In fact, it was the Islamist guerrillas that carried out the attack and another in Aleppo that killed 30 civilians. The Israeli media blamed Assad and the international media, pressured as usual by Israel’s propaganda machine, blamed Assad. However, the neocon propaganda was so weak, President Obama opted not to commit U.S. forces to fight against Assad’s government.

The intelligence chatter from eastern Ukraine indicates that the United States and its allies in Kiev are going to use, once again, a page from the WMD false flag playbook, previously employed in Syria, Libya, Sudan, and Iraq.