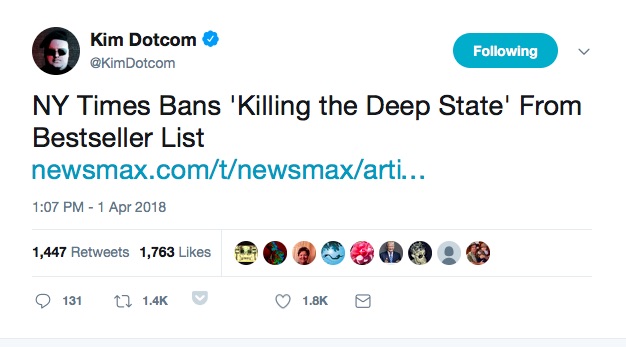 WASHINGTON, D.C. – On Easter night, entrepreneur Kim Dotcom tweeted The New York Times had “banned” the book Killing the Deep State: The Plan to Save President Trump from the New York Times bestseller list, citing an article published on Newsmax reporting the same.

Any book banned by The New York Times bestseller list is a high endorsement for readers seeking to bring justice to the co-conspirators who planned the Obama/Clinton coup d’état.

As noted by Newsmax, Killing the Deep State debuted last week at No. 10 on the non-fiction hardcover list compiled by Nielsen BookScan, the book industry’s only nationally recognized sales tracking list.

And yet, the influential New York Times Book Review inexplicably has not listed Killing the Deep State on its hardcover bestseller list, despite the fact it outsold many of the books that did make its list.

For example, going by sales reported by Nielsen, Killing the Deep State should have landed at No. 4 on the Times’ April 1 list of its Top 15 print hardcover bestsellers, right after Tara Westover’s Educated (Random House).

But instead, the Times’ No. 4 spot is held by I’ll Be Gone in the Dark, by Michelle McNamara, (Harper) even though it sold hundreds of copies less than Killing the Deep State did.

As further noted by Newsmax, Killing the Deep State also sold substantially more copies than the 11 other books on the list, including such titles as Obama by Pete Souza, Leonardo Da Vinci by Walter Isaacson, and Born a Crime by Trevor Noah.

While I appreciate Kim Dotcom’s apparent interest in my work, I want to make clear that I have never been in contact with Kim Dotcom.

Kim Dotcom’s tweet was entirely spontaneous on his part and unsolicited on my part, although I acknowledge and appreciate his support.

This also affords me the opportunity to put on the record that I have never made any attempt to contact Julian Assange, or with any of the identities who may have posted as Guciffer or Guciffer 2.0.

Given my background having held a top secret clearance with the Agency for International Development through the State Department in the 1980s, I was confident anyone in touch with Kim Dotcom, Julian Assange, and or Guciffer/Guciffer 2.0 would immediately draw the attention of intelligence agencies around the world, including most likely the NSA, CIA, and various military intelligence groups in the United States.

There is also another misconception circulating on the Internet about your author.

A YouTube user going by the name “Defango” has published a video claiming that I am secretly QAnon, the intelligence agent posting on the deep Internet bulletin board known as “8chan.”

Defango appears also to be circulating an email thread that claims to have an email I wrote that he offers as “evidence” to support the claim that I am QAnon.

I affirm here that the email in question is a forgery, that I never wrote any such email, and that its circulation should be considered a pathetic attempt to peddle fiction as fact.

Please let me make clear that while I am not QAnon, my role has been to decode Qanon so that the cryptic posts QAnon has made are more readily understood by a larger audience not trained in interpreting what appears to be military intelligence-derived information that QAnon is making public.

As further noted by Newsmax, Killing the Deep State debuted at No. 8 in the Publishers Weekly hardcover non-fiction for the week of March 26, No. 10 on Barnes & Noble’s non-fiction bestselling list, and No. 10 at Bookscan, while becoming a No. 1 bestseller on Amazon.com on its first day of release.

Killing the Deep State: The Fight to Save President Trump is now available at the Infowars Store.