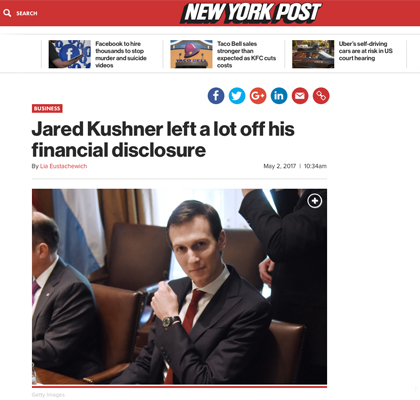 The president’s son-in-law discussed his stake in Cadre, which is housed within a company called BFPS Ventures LLC, with the Office of Government Ethics and “resigned from Cadre’s board, assigned his voting rights, and reduced his ownership share, Kushner’s lawyer Jamie Gorelick told The Wall Street Journal.

Kushner also reportedly did not disclose $1 billion in loans on several properties from over 20 different lenders, but didn’t appear to violate disclosure rules.

“Anything that presents a potential for the conflict of interest should be disclosed so that the public and the press can monitor this,” said a Republican former chairman of the FEC (Federal Election Commission) Trevor Potter.

Kushner co-founded Cadre with his brother Joshua and Ryan Williams, a friend and former Kushner Cos. employee in 2014. Cadre markets properties to prospective investors and collects a fee on each deal made.

Williams, Cadre’s chief executive, said the company is working to update its public filings to “reflect Jared’s non-operational, non-management relationship with the company, which has been in place since the inauguration.”

Kushner’s partnership with Soros may be seen as unsavory by Trump and his base, since it was Soros that poured millions into actively fighting against Trump’s agenda through disruptive leftist activist groups like the Open Society Foundation (OSF), demonstrations and “protests”, and propaganda.

This isn’t the first time that Kushner’s questionable business ties have come to light.

Last week we reported that Kushner had been compromised with bribes by Communist China over his family’s office tower on 666 Fifth Avenue.