Russian marines clashed with ISIS near Latakia, Syria, on Sunday, according to Russian media.

During the fight the marines allegedly killed several militants and captured others after ISIS attempted to attack an airbase operated by Russian military, reported the Russian newspaper Segodnya.

Interestingly, the newspaper also reported the ISIS militants “possessed a detailed plan of the air base and clear satellite imagery with the marked key military installations,” but Russia has only been operating the airbase for the past week or so.

That begs the question: who provided ISIS with that kind of intelligence?

Russian activity at the airbase ramped up Friday upon the arrival of advanced Russian fighter jets, including four Su-30SM Flankers which are loose equivalents to the U.S. F/A-18F Hornet.

“It is considered one of the most advanced aircraft in Russia’s inventory with updated avionics and a wide array of weapons at its disposal,” Jalopnik.com reported. “Sixty of the jets are planned to be delivered to Russian forces by next year.”

Russia has also shipped in tanks, artillery and attack helicopters into Syria and has opened up high-level communications with the U.S. military to ensure that no misunderstandings lead to conflict.

Moscow and Washington operated a similar ‘red phone’ hotline during the Cold War, a striking allegory to the current state of tensions between the two countries, especially as neo-conservative thinktanks rattle their sabers at Russia.

Right now the Defense Dept. is “reviewing and updating its contingency plans for armed conflict with Russia,” according to Foreign Policy magazine.

“After 1991, military plans to deal with Russian aggression fell off the Pentagon’s radar; they sat on the shelf, gathering dust as Russia became increasingly integrated into the West and came to be seen as a potential partner on a range of issues,” FP’s Julia Ioffe reported. “Now, according to several current and former officials in the State and Defense departments, the Pentagon is dusting off those plans and re-evaluating them, updating them to reflect a new, post-Crimea-annexation geopolitical reality in which Russia is no longer a potential partner, but a potential threat.” 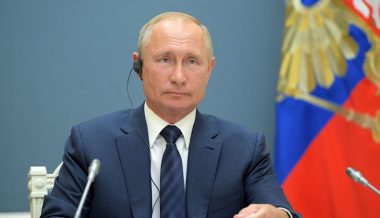