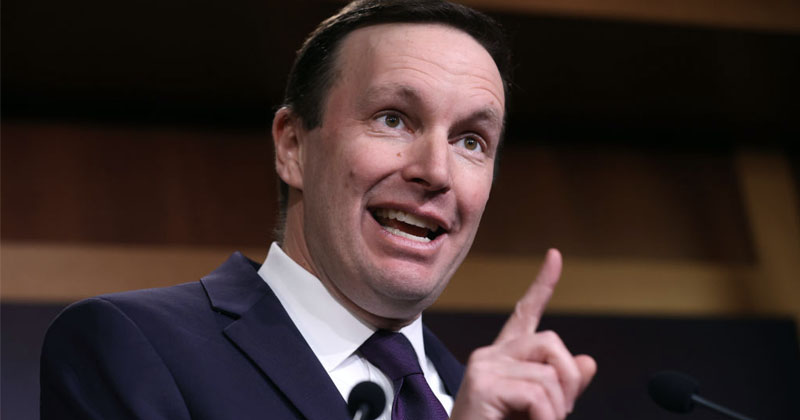 If true, such a meeting by the Connecticut senator would not only violate the Logan Act, but represents a clear hypocrisy of considering Democrats spent three years trying to impeach President Trump for “colluding” with Russia, which turned out to be entirely false.

Such a meeting would mean Murphy had done the type of secret coordination with foreign leaders to potentially undermine the U.S. government that he accused Trump officials of doing as they prepared for Trump’s administration. In February 2017, Murphy demanded investigations of National Security Advisor Mike Flynn because he had a phone call with his counterpart-to-be in Russia.

“Any effort to undermine our nation’s foreign policy – even during a transition period – may be illegal and must be taken seriously,” Murphy said in 2017 after anonymous leaks of Flynn’s phone call with Russian ambassador Sergey Kisylak were published. He also strongly criticized the open letter some Republican senators sent Iranian leaders during the Obama administration’s campaign for a nuclear agreement.

Murphy failed to mention that he defended Secretary of State John Kerry for conducting the same kind of secret meetings with Iran in 2018.

Trump slammed Kerry after he admitted to conducting “three or four” secret meetings with Iran in 2019 to undermine his new policy of withdrawing from the 2015 Iran Nuclear deal.

Saudi Arabia and others in OPEC will more than make up the Oil Flow difference in our now Full Sanctions on Iranian Oil. Iran is being given VERY BAD advice by @JohnKerry and people who helped him lead the U.S. into the very bad Iran Nuclear Deal. Big violation of Logan Act?

Trump goes on offense — filing suit against Cummings and Democrats who want to continue investigating Trump and hinting that John Kerry violated the Logan Act by working with Iran. And, mainstream media idol, Bob Woodward, desperately tries to distance himself from Russiagate