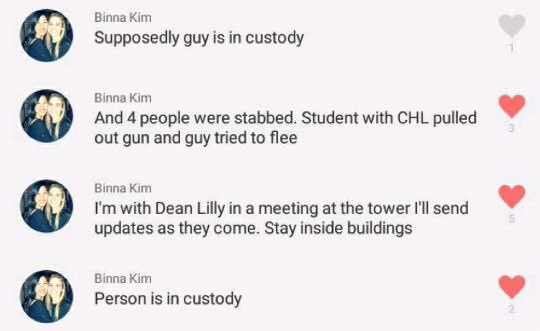 A student at the University of Texas at Austin reportedly used a concealed handgun to stop a knife attacker who had stabbed three people on campus Monday.

On social media, student Alyson G described the terror as it unfolded before her eyes.

“Me and Brandon were eating at Chilantro’s truck at a long picnic table. Then at the end of the table some guy comes up in a bandana and stabs the knife into the table and looks all of us in the eye. I thought it was just some theatrical stunt or something. He pulls the knife out without saying anything and turns around to slash some guy in the back of the neck. The slash victim grabs the back of his neck and yells (people look at him and I await some sort of ‘gotcha’ statement). But then… The attackers walks to another guy and stabs him in like the kidney region in his back. Some guy yells run and we all bolt to McComb’s.”

Another student on social media recounted grabbing their gun and chasing after the knife-wielding attacker before police subdued him.

UT Student Government Vice President Binna Kim also claimed on social media that a CHL holder had stopped the attack, though she later apologized, saying her report was “unconfirmed.” 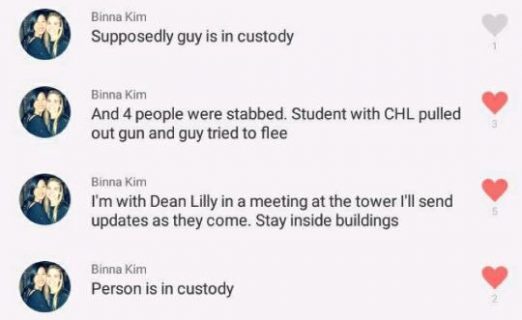 No confirmation that a student with a CHL stopped the crime. I apologize for sending that message in a GroupMe to friends before confirming. https://t.co/xiWanjOBlo

College news site The Tab also wrote that “Eyewitnesses have reported seeing a student pull out a concealed handgun on the suspect, and made him back down.”

The University of Texas did not return Infowars’ requests for comment. Neither the University, nor Austin law enforcement agencies have confirmed that a student with a concealed carry weapon stopped the attacker.

Speaking to Infowars, Central Texas Gunworks Owner Michael Cargill stated the attacker was brought down by a “good guy with a gun.”

More photos from the scene: pic.twitter.com/XZpymHUvgt

According to KXAN, White had a history of mental illness and had recently been involuntarily committed to a mental health facility in a nearby town.

Police have as yet found no motive for the attack.