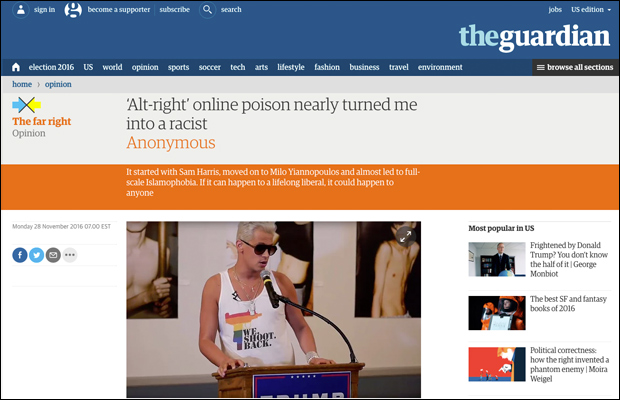 A notorious Internet troll reportedly convinced The Guardian to publish a fake news story Monday on his journey to becoming a racist member of the “alt-right.”

Godfrey Elfwich, who jokingly describes Xirself (preferred gender pronoun) as a “Genderqueer Muslim atheist,” has gained a large Twitter following for trolling the far-left. In 2015, Elfwich famously made his way onto a BBC radio show and convinced the host that Star Wars was racist because Darth Vader was black.

In what could be the most trollish act yet, Elfwich appears to have had an article anonymously published on The Guardian entitled, “‘Alt-right’ online poison nearly turned me into a racist.”

“It started with Sam Harris, moved on to Milo Yiannopoulos and almost led to full-scale Islamophobia,” the article states. “If it can happen to a lifelong liberal, it could happen to anyone.”

“It hit me like a ton of bricks. Online radicalisation of young white men,” Elfwich says. “It’s here, it’s serious, and I was lucky to be able to snap out of it when I did.”

The story was immediately spread online by several prominent left-leaning journalists, eager to use the fabricated narrative to confirm their own biases.

CJ Werleman, a columnist for the Middle East Eye and author of “The New Atheist Threat,” used the story as an example of how “new atheism” is a gateway to “neo-Nazism.” Toby Moses, an assistant opinion editor at the Guardian, also proudly shared the story online.

Great read on how New Atheism is a gateway to Alt-Right (neo-Nazism). https://t.co/OvZEdAVxpZ

‘It was so subtle, at no point did I think my growing Islamophobia was genuine racism’ on the ease of radicalisationhttps://t.co/yxNuPhn3fI

RT @MoAnsar: Many in the mainstream should take note. ‘Alt-right’ online poison nearly turned me into a racisthttps://t.co/zi8M03F04j

I’m so grateful this was written-Islamophobia is the “alt-right” gateway drug for so many young white men. https://t.co/iP6mfpsBNW

This is not a joke btw. I genuinely wrote it.

Sam Harris, the atheist author who was jokingly criticized in the story, immediately began questioning journalists who shared the article. Other reporters began picking up on the alleged hoax soon after.

This appears to have been a hoax, Glenn. You retweeted it 3 times to 779K people. Got anything to say?@ggreenwald https://t.co/bbvljbrQrZ

According to one blog covering the story, The Guardian states that it stands by the article’s publication.

“We are confident of the identity of the author and the sourcing of the article in question.”

The Truth About Fake News