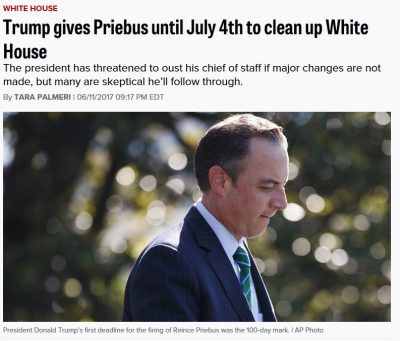 President Donald Trump has given his chief of staff, Reince Priebus, a July 4th deadline to clean up his mess in the White House or face removal, according to a report from Politico.

“President Donald Trump has set a deadline of July 4 for a shakeup of the White House that could include removing Reince Priebus as his chief of staff, according to two administration officials and three outside advisers familiar with the matter,” reported Politico’s Tara Palmieri.

While President Trump has threatened to shakeup his White House staff in the past, this threat is significant given both the continued dysfunction in the White House and the fact Trump is “under more scrutiny than even regarding the sprawling Russian investigation.”

In addition, July 4th is the deadline set by Senate Majority Leader Mitch McConnell for passage of a healthcare bill through the chamber. 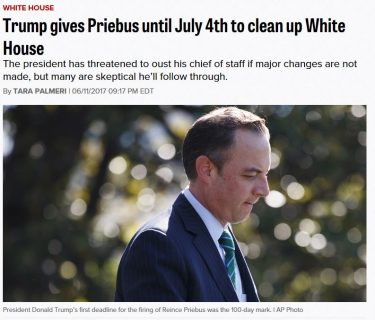 “Days after his return from his first foreign trip late last month, Trump berated Priebus in the Oval office in front of his former campaign manager Corey Lewandowski and deputy campaign manager David Bossie for the dysfunction in the White House,” Palmieri added.

“I’m giving you until July 4,” Trump reportedly told Priebus. “I don’t want them to come into this mess. If I’m going to clean house, they will come in as fresh blood.”

Trump has reportedly considered bringing on Bossie as deputy White House chief of staff and Lewandowski as a senior adviser, a scenario described as “the worst idea of all time” by Trump insider Roger Stone.

“In many of the same newspaper stories if the ‘fact’ that fired Trump campaign manager Corey Lewandowski will be returning to the first circle of Trump’s advisors,” Stone wrote. “Lewandowski would supposedly spearhead am effort to ‘find the leakers’ and to enforce ‘discipline’ and ‘security’ in the Trump White House.”

“This is the worst idea of all time.”

Among those reportedly being considered for chief of staff should Priebus be removed include former campaign aide David Urban, who orchestrated Trump’s successful campaign in Pennsylvania, and Blackstone executive Wayne Berman.

One adviser to President Trump mocked the reporting from Politico, claiming “it’s become comical that every holiday becomes a referendum on Reince.”